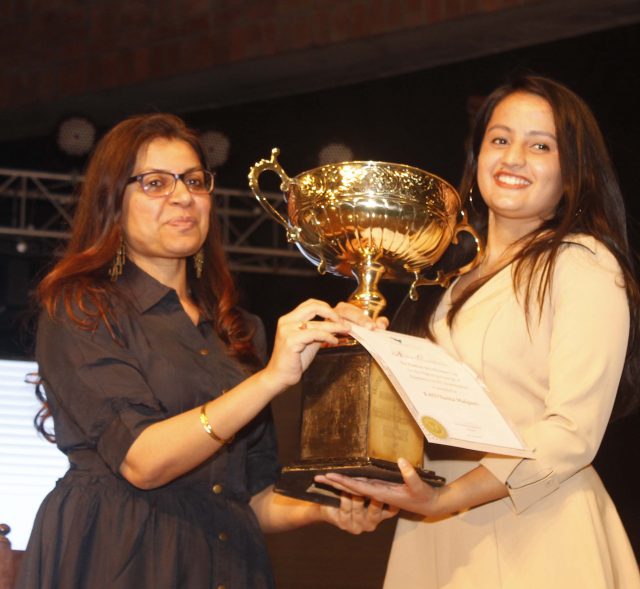 Dehradun, 20 Oct: The second day of the Welham Girls’ School Founder’s Day celebrations began with inauguration of the two state-of-the-art Indoor Badminton Courts measuring up to international standards. Aamirullah Khan and Rohit Bhasin accompanied by Principal Padmini Sambasivam, Alankrita Srivastava and other Board Members inaugurated the new facility.
The exhibitions this year were based on the theme ‘as is the microcosm, so is the macrocosm’. Students of Classes VI to XII undertook extensive research to explore Welham as an Ecosystem, taking into account the various resources, both, renewable and non-renewable, that are consumed by them. These include food, water and electricity among others. They carried out audits and explored various means by which they could save them to ensure abundance for generations to come. The students clearly depicted how ‘sustainable’ for them is not an adjective, but a verb as they live this concept every day both materially and emotionally. The students also showcased their special interest and talent in Art and Craft, Photography, Pottery and Design through their exhibits.
The Nukkad–Nataks, the dance shows, the Dastaangoi and Robotics display made the Exhibitions literally come alive.
The main Founder’s Day programme included Speeches, Prize Distribution and a dance performance, ‘Kriti Spandana’. The dance drama allowed the audience to walk through an art museum displaying the works of the renowned painter of the 19th century, Raja Ravi Varma, with the artist himself pondering over the stories he wished to relate through his masterpieces.
Alankrita Srivastava, an alumna and one of India’s leading contemporary film writer-directors, was the Chief Guest. She has a penchant for telling women’s stories and likes to explore the inner world of women through her films. Most recently, Alankrita’s third feature film as writer-director, ‘Dolly Kitty Aur Woh Chamakte Sitare’, featuring Konkona Sensharma and Bhumi Pednekar, had its World Premiere at the prestigious Busan International Film Festival earlier this month and will release in theatres in Spring, 2020. Alankrita’s second feature film as writer-director, ‘Lipstick Under My Burkha’ released in India in July 2017, and was a critical and commercial success. It was banned in India for being too honest a portrayal of women, and Alankrita had to fight a long battle to get it released in India.
Vinita Bali, a global business leader, who has smashed the glass ceiling – having held principal positions at corporate giants like Britannia, Coca-Cola and Cadbury is also the President of the Board of Governors of the School. She shared the dais along with Principal Sambasivam and other members of the School Board that included Gunmeet Bindra, Principal, ‘Welham Boys’ School’, Matthew Raggett, Principal, ‘The Doon School’, among others.
The School Annual Report was presented on the occasion by Principal Padmini Sambasivam. Alankrita Srivastava also addressed the gathering and encouraged the students to dream and work towards that dream by making concrete plans, never to give up in the face of hurdles and rejection, but persevere as she had done after the commercial failure of her first film, ‘Turning 30’. She urged the students to become financially independent in life and constantly endeavour to step outside their comfort zone and learn to put themselves first without being apologetic and “learn to live life on your own terms”.
The Awards given out were not just to recognise marks alone or achievements in Sports, etc., but to extol qualities that build a person’s character – Good Citizenship, Helpfulness, Creativity, Compassion and Community Service.
‘Long Service Awards’ were also presented to one Matron and two Support Staff for having served the institution for 25 years.