Dehradun, 11 Sep: The historic day of 11 September, 1893, was remembered with dedicàtion at Ramakrishna Mission, here, today.
A youth convention was organised in which 350 students from Law College, Uttaranchal University, Graphic Era University, Dolphin College of Biomedical Sciences, DIT and other colleges participated. Young children of Gadadhar Abhyuday Prakalp of Ramakrishna Mission Dehradun participated with full fervour.
Swami Atmajand, Secretary of Ramakrishna Mission, Chandigarh, was the Chief Guest and the event was presided over by Swami Asimatmand, Secretary of Ramakrishna Mission, Dehradun.
Swami Asimatmand welcomed everyone and elucidated the background of World Parliament of Religions at Chicago which was held to celebrate the 400th anniversary of Columbus’ discovery of America.
He described the struggle of Swami Vivekanand for his participation in the World Parliament of Religions and broke all the norms when instead of addressing them as ‘Ladies & Gentlemen’, he addressed the gathering as Sisters and Brothers of America and the 4000 people burst into rapturous applause. The rest is history.
Present at today’s Youth Convention were Dr Shukla, Dean, Computer Science Department of Graphic Era University, and Dr Suchismita Sengupta Pandey, Additional Commissioner, Civil Supplies and Consumer Protection Department, who highlighted the salient features of Swami Vivekanand’s teachings and their relevance amidst today’s youth.
Simran Juneja of Law College, Akshay Singh and Shubham Rawat of Graphic Era University, Ankita Belwal of Dolphin College of Biomedical Sciences, Rahul Markandey, a young devotee of Ramakrishna Mission Ashram, delivered a wonderful speech on Swami Vivekanand’s life and teachings.
Students of Gadadhar Abhyuday Prakalp of Ramakrishna Mission Ashram delivered mellifluous renditions under the guidance of Bharati Chatterji.
The youth convention was organised by Paladh Maharaj and the stage was anchored by Sushma Khetrapal.
The youth convention concluded with a resolution that Swami Vivekanand’s clarion call of ‘Arise, Awake and Stop Not till the Goal is reached’ will be inculcated in true Letter & Spirit. 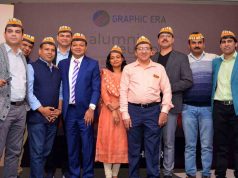