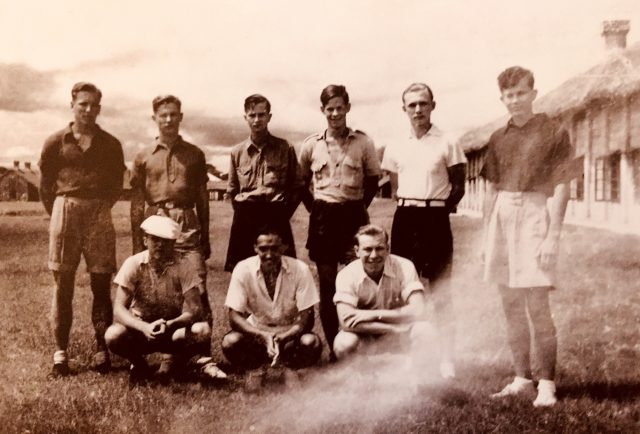 St. Helen’s cottage, sits on the southern aspect of Waverley Hill, and was originally home to Reverend Maddock up until March 1867 when he ‘was called to his heavenly home on the eve of departure after seventeen years of faithful work as a headmaster of Mussoorie School’. Smallpox had cut short another life. By the turn of the century, the place was home to Prince Karam and his wife, the exquisitely elegant Princess Sita of Kapurthala, who had a tradition of high teas, which brought together a sprinkling of the old and the new; the young and the forgotten around tables that over flowed with scones, cucumber sandwiches, chiffon cake, éclairs and minced pies mingled with Nepalese khatta- allu and lingras (or tree-ferns). When I first met Martand Singh, her youngest son, I found him as gentle as his mother – except that he was levitating (or that’s what it seemed to me) on the scaffolding inside Christ Church. It was our first meeting where he was restoring the church’s stained glass windows. Straying in to make pictures, I walked down the aisle, even as the grace of those tapering windows took my breath away. Built in 1836, age had begun to tell, and that was what had brought Mapu to the oldest church in the Himalaya. Descending from his perch, he joined me in a patch of autumnal sunshine, for the first of many happy meetings. “Wonderful nah? The magic of these windows,” He chuckled. “It’s a miracle to have survived for two hundred years.” As had the rubies that he was into when I saw him for what was to be for the last time. “Rubies,’ he said, ‘Have the original spark of life – a drop of the heart’s blood of Mother Earth.” Meanwhile back at St. Helen’s, the high-teas continued. One day, among Mapu’s guests, was one–a short and stubby fellow- flitting furtively amongst the furniture, gliding from one room to the other, like Columbus in search of a new route. Make no mistake, he was heading for a refill and you could trace his footsteps by following the trail of gravy dribbling off his plate and on to the burnished floor. Here was a character dropped out of Charles Dickens. ‘Quiet fellow,’ I nattered to an old timer. ‘That’s because his mouth is stuffed!’ he snapped. As I went past his mother, she slipped a crumbling parchment into my hands, whispering: ’It’s Arun’s! Could you please show it to your family pundit?’ I did. ‘This is no horoscope! It’s a horrorscope! Pure horror!’ Shuddered the Barlowganj pundit. ‘His stars predict a walking disaster. Little will happen to him – but the ones around him must suffer!” And suffer they did. And how! For instance, there was his friend from his days as an alumnus of Roorkee’s Thomson Engineering College, who had done well. Wanting to help his batch mate, he offered him a job in the cement factory in Indonesia. Things went well, or so folks thought until the day Arun posted the entire tendering details of the company on the web. ‘Why?’ yelled his friend. ‘It’s my laptop, I pressed the wrong button!’ Arun tried to explain. But by then the resultant tsunami hit the shores. Under a cloud, he was in the lockup, though briefly, as his retired father’s contacts chipped in to bring the boy home. Later his father said: ‘Ganesh! You know the Principal of that new school, can you try to get him a job there?’ I did. The letter followed, but it was too good to last. Two weeks later, he was back. Reason? The school had thrown him out. ‘That chap wasn’t cut out to be a teacher. On my rounds, I found him reading a magazine while the boys were throwing paper darts at each other.’ The Principal said. A repeat performance at other institutions and soon after we had run out of schools. With all doors shut, Arun left for Calcutta. That singular act of generosity perhaps saved our little hill station. He twiddled the knob and Bengal began to hit the headlines. But that’s another tale for another day.