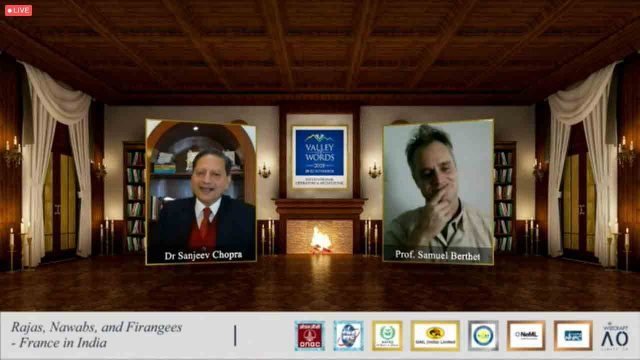 By Our Staff Reporter
Dehradun, 21 Nov: There were three sessions dedicated to France on the second day of the Valley of Words Literature & Arts Festival. One session was a conversation on Rajas, Nawabs and Firangees-France in India between Prof Berthet and Dr Sanjeev Chopra. Then there was a workshop on French Translations convened by Prof Alain Desoulieres and Christine Cornet. Yet another debate was on the topic “Prince, Patron and Patriarch”. This was a conversation featuring Brigadier HH Sukhjit Singh and Cynthia Meera Frederick with Aman Nath. Ambassador of France Emmanuel Lenain chaired the session.
During the discussion between Prof Berthet and Chopra, both observed that transfer of French colonies of Chandannagar and Pondicherry to India after independence were lot smoother as compared to transfer of Goa and Daman, Diu by Portugal to India. Some interesting discussion was seen in all the three sessions.