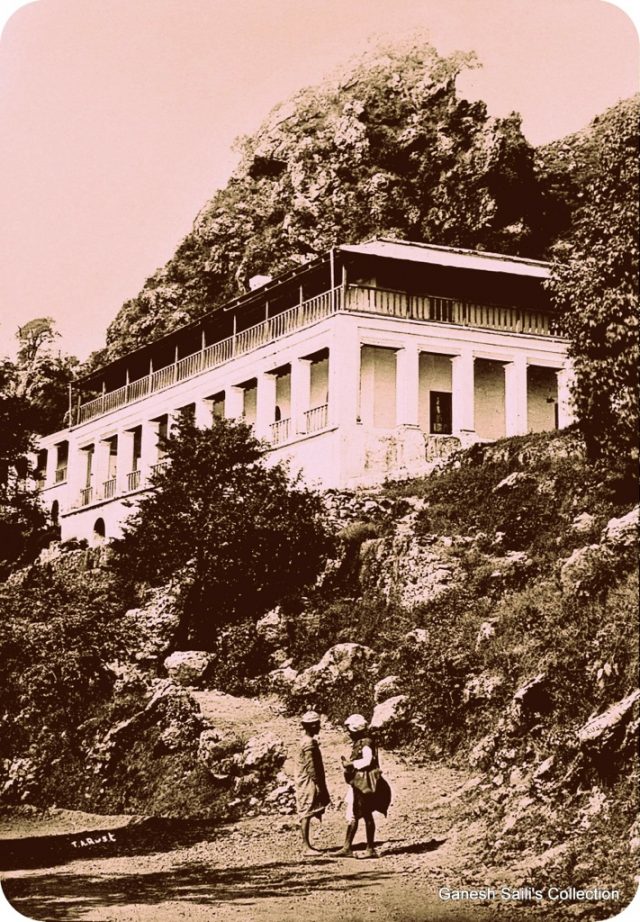 ‘ Dressed like a doll – his little daughter – he would take everywhere!’ Aunty Sita once said as we chit-chatted about our early photographers at her home in St Helen’s Cottage. Regrettably, I let the moment pass. What relevance did it have? I could not have got it more wrong. Thirty years later, I chanced upon author Charlotte Cory, who had found a diary belonging to the Rust family. They had left the hill station, a hundred years ago, for Kandy in Ceylon, from where their old patriarch had originally come. ‘Ever hear of T.A. Rust?’ Asked Charlotte, as we settled down. Talking of understatements, I almost spilt my drink. For down the years, I had felt the ghosts of our early photographers: Thomas Alfred Rust and his son, Julien Geofrey, stalking me. Its almost as if they were peering over my shoulder as I tried tracking down their sepia tones images of our station. In 1869, T. A. Rust began his career as an apprentice to F.W. Baker in Calcutta. Five years later you find him owning five studios: in Allahabad, Mussoorie, Landour, Muree and Meerut. Later his son Julian had his only one studio (1893 to 1914)in Regent House on Kulri Hill. Making pictures of my teacher, Miss Edith Garlah, I happened to ask if she had known Julien. ‘Oh yes!’ she remembered. ‘He was an apiarist. Added drops of vanilla to the sugary syrup he gave the bees in the winter months.’ Meanwhile, Grandpa Rust scratched ‘TA Rust’ as a sort of copyright on the prints. Sometimes, those hundred and fifty-year-old prints do turn up marked by his perfect handwriting: ‘View of Balahisar’ or ‘View from the Gorge’. For years I had looked around for details of the family, but it maybe it was too late. The trail had gone cold. ‘Never mind!’ I consoled myself. ‘Their work shall triumph over Time.’ Apparently, Charlotte Cory, had patiently uncovered the layers of history to discover that Rust had originally left Ceylon, lured of the Himalayan foothills. Perhaps he had been drawn here by the tales of the rich and famous flocking here. It must have been music to his ears. And like all young people down the ages; he had taken to the new technology like a duck to water, going from place to place; home to mansion; and from palace to palace snapping pictures that saw him become a man of considerable means. For forty years, the father and son duo photographed our hills. And from 1874 to 1914, they turned their images into postcards that were quickly snapped up by tourists and visitors alike. Of course today those originals are collector’s items selling for a small fortune, if and when, they turn up in the odd antiquarian shop. They represent the best of the last and the last of the best. Later in 1914, Julian sold off his family business and moved to South Africa with his Irish wife, Elizabeth Anne Nelligan. They had four children: Cecil, Violet, Helen and another who succumbed to diphtheria as an infant. Slowly a bit at a time, money dried up forcing Helen Maude (the one whom Julien once dressed like a doll) to sell the sprawling Mount Farion Estate. She moved into what she referred to as ‘the old cowshed’. None of the three married. Cecil turned a proprietary planter and Chairman of the Times of Ceylon. He passed away aged fifty-five in 1960. Violet too died in 1974. That left Helen devastated and by 1982, ‘the light had gone out of her life.’ She lived on, though with a slightly hazy memory of better times and moved into the sunset with an unfailing faith in God. ‘He looks after me,’ she’d tell visitors. ‘I have no troubles.’ Flipping through the pages of the family Bible, with the family crest emblazoned across it: ‘Fortis et Stablis’ or brave and steadfast – that describes Helen Maude Rust last days. ‘When I last met her, she was in her eighties, still loved to pose even as she giggled.’ Charlotte Cory chuckled. ‘Ganesh! There you are! She is definitely that doll you were looking for!’