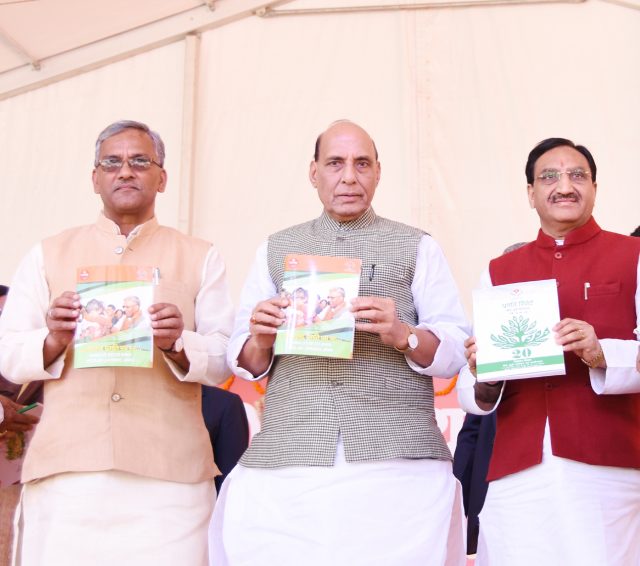 DEHRADUN, 9 Nov: Defence Minister Rajnath Singh today asserted that Uttarakhand was poised to make a rapid progress. He was speaking as the chief guest at the main function of State Formation Day here today. Congratulating the people of the state on the state formation day, Singh added that he had a deep connection with Uttarakhand and reminded the gathering that he was privy to the formation of Uttarakhand and had signed several agreements and documents during the creation of Uttarakhand. The Union Minister asserted that Uttarakhand was Dev Bhoomi and that people from every village of the state were in the army. The state was not just home to Char Dhams but also was a military Dham itself. In addition, the state had also emerged as a Vidya Dham, an education hub for students from across the country. He called upon the youth of the state to come forward and contribute towards the development of the state. He said that unity in diversity was found only in India. There was generosity and universalism imbibed in India’s culture. The Defense Minister said that India’s past had been very glorious. He said that today India was moving fast. The goal of the government was to make India an economy of 5 trillion US Dollars. Only young people could make it happen, he asserted and noted that the young people of the country were taking Startup India very seriously and realising their dreams and taking the country forward. At the function, Chief Minister Trivendra Singh Rawat greeted the people of the state on the State Formation Day. He also paid tribute the state agitationists and martyrs on the occasion. Speaking at the main function, Rawat said that the state’s income had grown rapidly in past 19 years and it was emerging as a happening state. It was an education hub now where students from 33 states and union territories were pursuing higher education. On this occasion, the CM also made several announcements. He added that He said that honorarium of folk artists would be raised. Old age pension and widow pensionwould also be hiked by Rs 200 per month with effect from 1 January, 2020. Chief Minister will bring marginal plan. Children aged between 3 and 6 years of age would be provided milk four days a week, banana and eggstwo days a week at the Aanganwadi Centres, he said. Fortified sweetened milk would be made available to children in primary schools and upper primary schools one day a week. He further announced a minimum daily honorarium of Rs 500 for UPNL and PRD contractual workers. He said that the Chief Minister Border Area Development Plan would be prepared and implemented for the for the development of border areas. This, he claimed would help prevent migration of people from mountains and remote areas and at the same time also create employment opportunities. Rawat announced that women’s hostels would be constructed in Selakui and Rudrapur to take day care of the children of working women. The CM declared that gap funding of insurance money would be reimbursed by the state government to insure animals in the state. Solid waste management plan would also be prepared for rural areas, he claimed.Rawat further announced that Minimum Support Price of traditional cereals such as mandua, jhangora, pafar and pulses would also be approved by the government. At the start of the function, Singh lit the lamp and inaugurated the ‘Bharat-Bharati Utsav’ ceremony. Cultural presentations were presented on the occasion. Earlier the union minister Dehradun to attend the main event held here on the occasion of Uttarakhand State Formation. He reached Jolly Grant Airport at around 12 noon and he was welcomed by Higher Education Minister Dhan Singh Rawat and other officials at the airport. From the airport, he headed straight to the venue of the main function today.