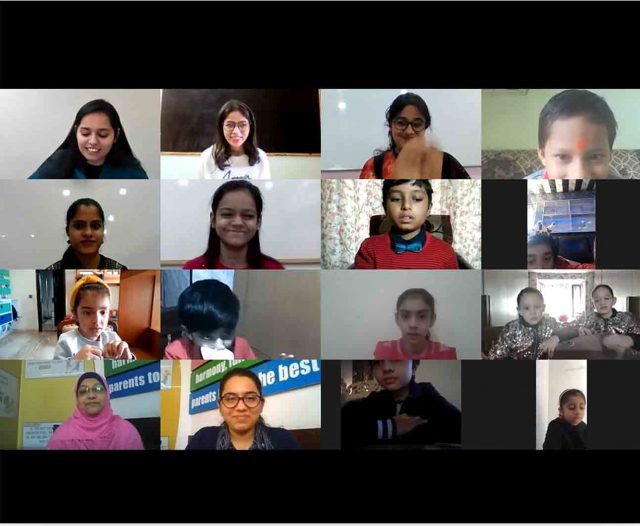 By Our Staff Reporter
Dehradun, 20 Nov: Students and Directresses across schools in the valley celebrated Children’s Day virtually this session due to the Covid-19 pandemic curtailments. From melody preparations to satires, a plethora of activities was live-streamed by the Directresses for the little utopians on 17 November — two days after Children’s Day. Utopia Primary School decided to hold late celebrations this year as the day coincided with Diwali and all the members were sharing their joy with their loved ones.
The Directresses waited for the students to join. All the students were asked to be present in their party casuals with a companion (their favourite toy). The programme started with a special assembly on Diwali. Utopians were shown a PowerPoint presentation by the Creative Coordinator which showcased the story behind Diwali. Students were shown different ways of decorating the house and rangolis made by two of the Directresses of the school.
Post the special assembly, the tiny scholars were asked to initiate an introduction of their companions, succeeding which, a game ‘Guess the Utopian’ was played with the children in which different practical recognisable traits were verbally shared and the students were asked to name him/her. This was followed by an amusing entertainment – students witnessed a rhythmic skit, titled ‘Hole In The Bucket’. The hidden talent of the staff members was revealed. A song was performed by the Admissions Counsellor, Priyanka Tripathi, in which she chose, ‘You are the world’. Other faculty members from the Academic Department joined her.