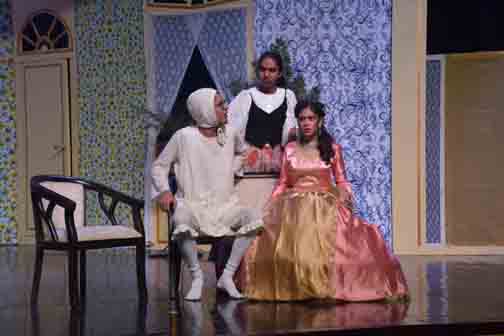 MUSSOORIE, 1 Sep: ‘The Imaginary Invalid’, a delightful comedy written by well known French playwright Molière, was staged in the Sir Kirby Laing Auditorium on 29 August. The play, which revolves around the life of Argan, a miserly hypochondriac and his amusing attempts to avail of the services of doctors without having to pay any bills, was directed by Meghna Mcfarland. Vinayak Vijavargiya played Argan to perfection, while Merin Kurian enchanted the audience with her role as the clever and resourceful Toinette, who is chiefly instrumental in saving Angelique, Argan’s daughter, from being forced to marry a most unbecoming dolt, and arranging for her to be married to her beloved, Cleante, who poses as her music director. While the roles of Angelique and Cleante were most skilfully brought to life by Xyla Nath and Ryan Maxwell Footman, respectively, Nick Varghese and Manu Sharma delighted the audience with their hilarious performance as the dolt and his daddy. Other characters like Argan’s brother and sister-in- law; the lawyer; the medical assistants and the junior doctors were done justice to by Nathan Tims, Vahiste Sinor, Zayaan Bharucha, Arjun Kothari, Souvik Kundu, Karan Patrick and Tenzin Kunsel.