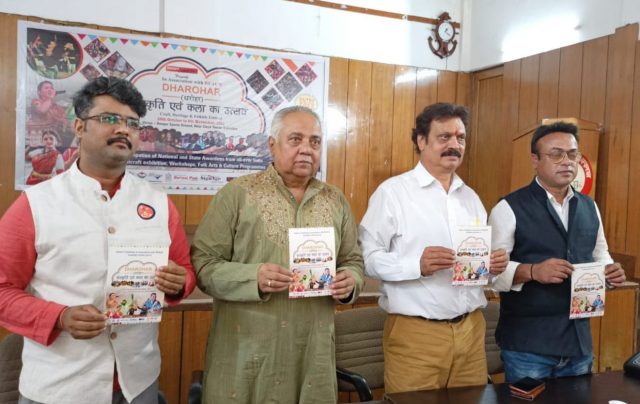 Dehradun, 27 Oct: A special initiative is being taken by Dharohar to rescue the artists and handicrafts persons from the situation that arose during the Corona pandemic.
A festival program of heritage culture and art will be organised from 28 October to 6 November at the Rangers’ Ground. It will be inaugurated by Cabinet Minister Subodh Uniyal and MLA Khajan Das.
The organisers provided this information at a press conference held at the Press Club, here, on Wednesday. On this occasion, international litterateur Dr Budhinath Mishra said that the artists had been unemployed for a long time due to Corona. The festival would be a new beginning to give them a platform. He said that the famous literary and cultural activists of Dehradun had united and created a new platform.
Filmmaker Sunil Varma said that the programme will begin with Jagar singing on 28 October. He said that the heritage festival would be organised in Dehradun as well as in some other cities. Social worker Firoz said that artists belonging to Uttarakhand would not only get a platform but handicrafts persons will also get a good market.
Cultural activist Himanshu Darmoda said that the dire situation during the Corona period created a lot of negativity among the artists. Now, Dharovar was being launched with the return to relative normalcy. By removing that negativity, other needy people including artists could be connected with employment and positive energy. Work would be done in this direction in future, also. He expressed the hope that the government would also cooperate fully with them in this regard.
Garhwali dance groups will perform on 29 October. On 30 October, Uttarakhand Folk Troupes and Punjabi Live Band will give performances. Qawwali will be organised on 31 October. On 1 November, a Kathak dance performance will be presented by Bhumika Verma and Manisha Sharma. There would be Garhwali Folk Music on 2 and 3 November.