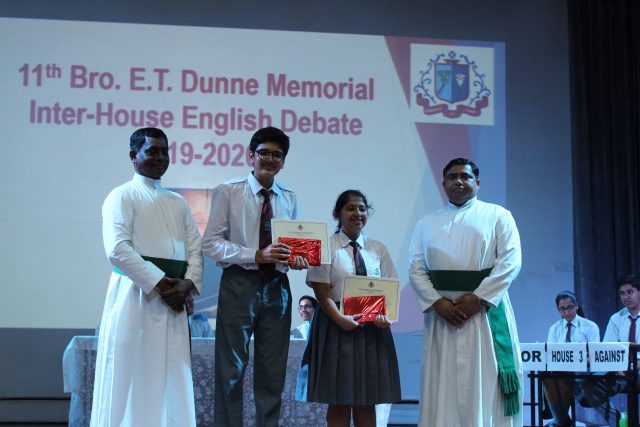 DEHRADUN, 3 Aug: Debates and declamations have been an integral part of the curriculum at St. Joseph’s Academy. The school organised the 11th Bro. E.T. Dunne Memorial English and Hindi Debate Competition on 3rd August.
The English debate was divided into two rounds – Extempore Debate and Turncoat round. The topic for the first round, i.e ,extempore debate was “This house believes that today’s generation is more divided than the previous one”. The debate commenced with the lighting of the inaugral lamp by the Chief Guest -the school Principal, Bro. Jeyaseelan, the Vice Principal, Bro. Binoi and the esteemed judges, Nadira Ahmed, Dr. Bidyut Bose and Prof. R. S. Rana. Suryansha Rawat was the chairperson for the debate. Payal Mehrotra, Ashok Bhatt and Abhay Vedwal assisted him in the proceedings of the debate.
The second round, the Turncoat round also remained equally exciting and thought provoking. The results of the English Debate were as follows- Rudraksh Dua of Bergin House bagged the 1st runners up Speaker and the Best Rebuttal prize.Riya Chahhbra of Bergin House bagged the Best Speaker Prize and Ujjwal Shukla of Donovan House, secured the prize for the Best Turncoat Speaker. Bergin House was adjudged the Best Team.
After a short break, the second round of Hindi Debate followed. The topic for the hindi debate was ,”Samajik Sanchaar Madhyam ne Aaj Parasparik Samvad Samapt kar diya hai”. The judges for the Hindi Debate were Snehlata Gupta, Dr. Anupama Nautiyal and Tanuja Singh. The chairperson for the Hindi Debate was Rabjot Kaur Sethi with Kushagra Mittal and Ridhi Sehgal to assist in the proceedings of the debate.
After the debaters had spoken out their thoughts, all the judges shared their views with the audience and enlightened the students with regards to the topic and debating in general.
The results of the Hindi Debate were – Jaitik Nagpal and Saksham Goyal of Bergin House bagged the position of Runners up Speakers whereas Anushree Sinha and Ananya Bhatt were adjudged the Best Speakers. Duffy House was adjudged the Best Team. The war of words and wit came to an end with Bergin House bagging the overall trophy.

Garhwal Post has established itself as a credible, balanced and forward looking newspaper in India. Based in Uttarakhand, the daily is read by the aware, socially and culturally responsible, high-income elite of society.
Contact us: info@garhwalpost.in
https://garhwalpost.in/date-time-today/