By Our Staff Reporter
Mussoorie, 11 May: Thirteen young Assistant Commandants (Medical Officers), including 3 female medical officers, after completing a tough and rigorous foundation training, joined the mainstream of the Indo Tibetan Border Police Force at an attestation ceremony held at the parade ground of ITBP Academy, here, today. These proud officers took the oath of allegiance to the constitution and Government of India under the National Flag in the presence of their families and dedicated themselves to the service of the nation. The officers hail from different parts of the country, which include three from Uttar Pradesh, two from Delhi and Rajasthan, and one each from Haryana, Punjab, Manipur, Assam, Kerala and Maharashtra. 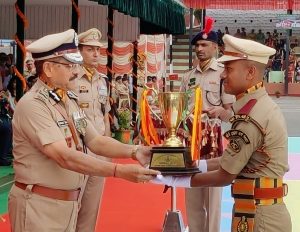 These Medical Officers were given training in various military and police related subjects like Tactics, Weapon Handling and Physical Activity, Intelligence, Field Engineering, Map Reading, Military Administration, Law and Human Right related issues.
Manoj Singh Rawat, Additional Director General, Western Command, ITBP, the Chief Guest, took the salute and reviewed the ceremonial parade. In his address, he congratulated the officers passing out of the Academy. He reminded the young officers about the glorious history and very high standards of discipline in the force. He reminded that ITBP is deployed in extremely harsh terrain with border outposts at altitudes as high as 19,000 feet, where temperature dips down to 45 degrees in the negative. Apart from guarding the extremely inhospitable high altitude borders in the Himalayas, the force is engaged in various other operational assignments like Internal Security, Disaster Management, etc. Despite various challenging operational scenarios, ITBP has always delivered beyond expectations in all fields. He praised mountaineer IG Aparna Kumar for her achievements, including climbing Mt Everest. 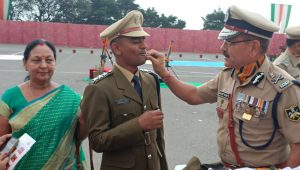 He also congratulated the trainee officers who were assessed best in various categories and were awarded various trophies. Assistant Commandant (MO) Uday Sankar Chetia was adjudged Over All Best Trainee, Assistant Commandant (MO) L Varun Singh was declared Best in Outdoor Activities, and Assistant Commandant (MO) Garima Rawal was awarded the Best in Indoor Activities Trophy. Further, he highlighted the commitment of the Academy to keep the standard of training high as ever.
IG Aparna Kumar, Director of the Academy, welcomed and felicitated the Chief Guest and public representatives of Mussoorie, retired and serving officers of the Indo-Tibetan Border Police Force, officials of the local administration and other dignitaries present at the convocation. She briefed them on the training given to the officers. She asserted that women display their valour and passion at par with men, and in ITBP, Mussoorie, women are given special attention regarding trading. She also welcomed the parents of the trainee Officers.
DIG Ajay Pal Singh, Deputy Director, ITBP Academy, proposed the vote of thanks.

Garhwal Post has established itself as a credible, balanced and forward looking newspaper in India. Based in Uttarakhand, the daily is read by the aware, socially and culturally responsible, high-income elite of society.
Contact us: info@garhwalpost.in
catchy dating headlines that attract sugar daddies https://garhwalpost.in/gay-cam-sites-like-omegle/