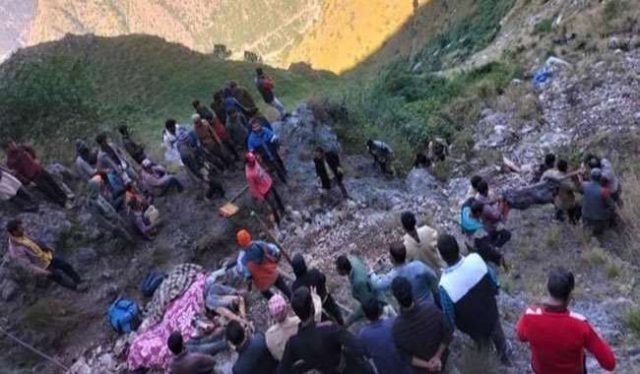 By Our Staff Reporter
Dehradun, 31 Oct: A utility vehicle plunged off a hill road in Chakrata area today leading to the deaths of thirteen persons on the spot. Two persons, including a child, were seriously injured.
Rescue operations were launched by local villagers and brought out the dead bodies from the ravine. The injured were taken to hospital for treatment.
Chief Minister Pushkar Singh Dhami expressed his grief at the incident and ordered the District Magistrate to hold a magisterial inquiry.
The utility vehicle was travelling from Baila Village of Bharam Khat area of Chakrata Tehsil to Vikasnagar, this morning. It went out of control on the Baila-Piguva Road some 200 metres from the village. It crashed through the parapet and plunged 400 metres downhill. Thirteen people on board were killed on the spot. A five year old boy of Biala and a villager from Piguva suffered severe injuries.
On receiving information about the accident, the villagers of Baila, Bulhad, Aasoi, Begi and other nearby areas rushed to the spot. The bodies were recovered after considerable effort. The injured were taken to Chakrata Hospital.
Those killed were Matbar Singh (40), his wife Rekha Devi (32), their two and a half year old daughter Tanvi, Ratan Singh (45), Jaipal Singh Chauhan (40), Anjali (15), Naresh Chauhan (35), Sadhram (55), Daan Singh (50), Isha (18), Kajal (17), Jitu (35) and Hariram Sharma (48).
Prime Minister Narendra Modi and Home Minister Amit Shah have expressed their grief at the incident.
The Chief Minister instructed the district administration to ensure proper treatment of the injured. He promised all possible help for the injured and the families of the deceased.
PM Modi has announced compensation of Rs 2 lakhs, each, for the families of the deceased, and Rs 50,000 for those injured.
Cabinet Minister Ganesh Joshi, Garhwal Commissioner and the Dehradun District Magistrate rushed to the site to monitor the rescue work. Instructions were also issued to the Road Transport Department to ensure there is no overloading of vehicles and to take strict action against such lapses.