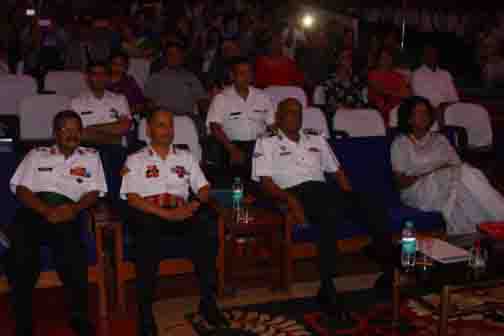 By OUR STAFF REPORTER
Dehradun, 31 May: Twenty-seven Cadets of the 185th Course graduated from RIMC here on 30 May. In an event attended by various Heads of Military Installations from the valley, the 27 Cadets received their parchment certificates in the Thimayya Auditorium. The cadets were also presented various awards for their excellent performance during the term.
The Sword of Honour was awarded to Cadet Captain Abhimanyu Singh. The Wavell Sword went to Cadet Section Commander Abhimanyu Ghorpade. The Major General Manoharan Trophy for the Best in Computer went Cadet NCO Vaishal Krishna. The Lt General SS Dhillon Trophy for the Best in Attitude was awarded to Section Commander Raghvendra Singh Baghel.
The Col DH Parab Trophy for being the most helpful was awarded to Cdt NCO Shaswat Sharma. The GOC UB Area Trophy for Best in Leadership went to Cdt Adjutant Abhimanyu Dashrath Ghorpade.
The winner of the ‘Sword of Honour’ Cadet Captain Abhmanyu Singh hails from Jaipur in Rajasthan. His father, Tejpal Singh, is a businessman.
The Chief Guest on the occasion was Air Marshal MSG Menon, Director General, Works and Ceremonials.
Air Marshal Menon also went around the exhibition put up by the various hobby clubs of the Cadets. Col Vivek Sharma, Commandant, presented the ‘End of the Term report’ in the jam-packed Thimayya Auditorium. Air Marshal Menon presented Parchment Certificates and ‘End of the term Awards’ to the passing out course.  He praised the institution for having   produced outstanding officers for the Armed Forces and also hailed the faculty for nurturing the young cadets at school and transforming them into guardians of the country.
Cadets of RIMC enthralled the audience by their talent in Dance and Music, which followed the Award Ceremony.  Cadets, parents and distinguished guests attended the ceremonial dinner in the Cadets’ Mess of RIMC.
The event was attended by a large numbers of high ranking Defence Officers, old boys and ex-masters settled in the valley. Some of the important dignitaries included Maj Gen Bhasker Kalita, GOC UK Sub Area, Rear Admiral Adhir Arora, NM, Joint Chief Hydrographer, Brig AAA Sinha, and Gp Capt Sukhen.
Cadet Captain Abhimanyu Singh delivered the vote of thanks.

Garhwal Post has established itself as a credible, balanced and forward looking newspaper in India. Based in Uttarakhand, the daily is read by the aware, socially and culturally responsible, high-income elite of society.
Contact us: info@garhwalpost.in
dating apps for gay teens https://garhwalpost.in/find-local-singles-in-my-area/ perth casual dating