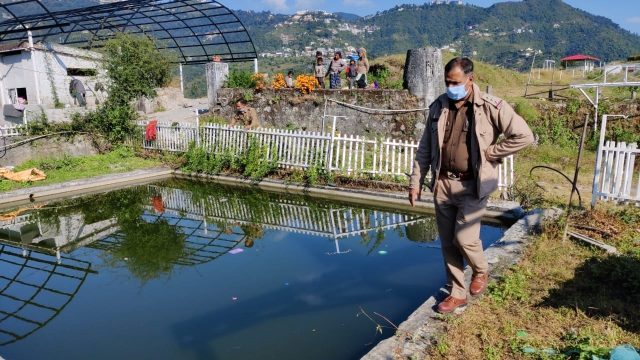 By Our Staff Reporter
Mussoorie, 25 Oct: Two children died due to drowning in a fish pond, here, today.
The incident took place in Dobana village near Kyarkuli village. Two brothers died due to drowning while playing near the fish pond. According to the information received, the father of the children works at the farm house located near the pond. He went to work on Monday, taking with him both his 7 year old and 4 year old sons. Both the brothers were playing near the pond and it is believed 4-year-old Vimal slipped and fell in. The 7 year old Vinod jumped in to try and save his brother.
With no one being nearby, both died due to drowning. Sometime later, the two were seen in the pond. The villagers immediately took both the children to the nearby Ayurvedic Hospital, where after examining the children, the doctor pronounced them dead. Doctor Nidhi Gurung said that, by the time the children were brought, both had died. Mussoorie CO Narendra Pant and Mussoorie Police Station Incharge Girish Chandra Sharma reached the spot and began investigations the incident. The police took possession of the bodies to send them for post-mortem, but the relatives of the children obtained permission from the SDM that it should not be done. The bodies were then handed over to the relatives after completing the legal paperwork.