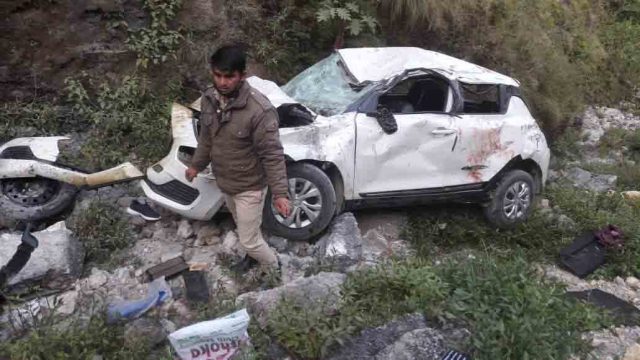 By  Our Staff Reporter
Mussoorie, 14 Oct: A car, UK-17-0466, went out of control on the Mussoorie-Kimadi road and plunged a hundred metres downhill, this evening. Two of the five youths in the car died on the spot, and the remaining three are seriously injured.
As soon as the incident was reported, the Mussoorie Police, Mussoorie Fire Service, 108 ambulance reached the spot under the leadership of Mussoorie Kotwal Devendra Aswal. Three youths were rescued from the trench by the police with the help of local people and sent by 108 ambulances to Max Hospital, Dehradun.
Mussoorie SI Neeraj Kathait said that two of the five youths died on the spot, while two of the three are in critical condition. Three of them are from Laksar, one from Roorkee and one from Dehradun. He said that the incident has been reported to the families of the deceased and the injured. He said that the dead bodies have been sent for postmortem examination. All the youths had come to visit Mussoorie and were going back via the Kimadi Road to Dehradun. The case is being investigated.
There are frequent accidents on the Kimadi road in which many people have lost their lives in the past, owing to lack of parapets. The Public Works Department and National Highways officials have been requested by the local people many times in this regard, but no action has been taken.
The deceased are Sagar Dhiman (20), r/o Chandrabani Road, Yash (18), s/o Ravi Dutt r/o Adarsh Nagar, Roorkee.