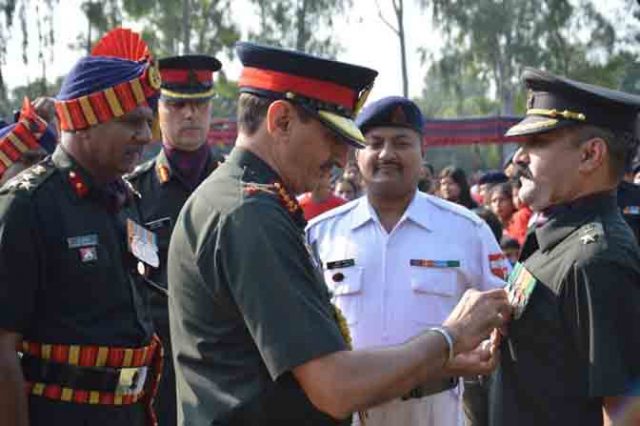 ROORKEE, 8 Nov: The Bengal Engineer Group and Centre, Roorkee, celebrated its 217th Group Day & 54th Reunion from 5 to 8 November. The Centre organised various ceremonial, sports and cultural programmes that were attended by 189 Officers, 362 Junior Commissioned Officers and 5689 jawans from all over the country. The Group Day and Reunion aimed to strengthen the regimental spirit and the bonhomie between tserving personnel and Veterans. Lieutenant General Harpal Singh, Director General of Border Roads, Colonel Commandant The Bengal Sappers, Military Survey and Border Roads Organisation, addressed the veterans and the serving Bengal Sappers fraternity on the occasion. In his talk, he summed up the laurels earned by the Bengal Sappers and expressed his belief that the Group would continue to grow by leaps and bounds and reach the pinnacle in all fields. He expressed his gratitude to the veterans for the strong foundation laid by them. Lieutenant General IS Ghuman, General Officer Commanding-in-Chief (GOC-in-C), Central Command, reviewed the Ceremonial Group Day Parade today. In his address, he lauded the immense contribution of the Group in operations, in which the group had earned 80 Battle Honours and 11 Theatre Honours. He was all praise for the role of Bengal Sappers in nation building activities including conduct of nuclear tests and aid during natural disasters. He appreciated the contribution of the Bengal Sappers in Sports and adventure activities highlighting the 11 Arjuna Awards won by Bengal Sappers, which is the highest by any one organsation. He exhorted the Officers, Junior Commissioned Officers and Jawans to continue to strive hard in pursuit of excellence. As part of the celebrations, a Pavilion Show consisting of Sky Diving, Paramotor Display, Motorcycle Team Tornadoes, Gatka Display, Khukhri Dance and Band Display was conducted for the Roorkee Military Station showcasing the adventurous spirit of the Indian Army. The celebrations also included a special event organised to commemorate the supreme sacrifice of the soldiers by honouring Veer Naris and Veterans.

Garhwal Post has established itself as a credible, balanced and forward looking newspaper in India. Based in Uttarakhand, the daily is read by the aware, socially and culturally responsible, high-income elite of society.
Contact us: info@garhwalpost.in
backpages hookups black dating website free