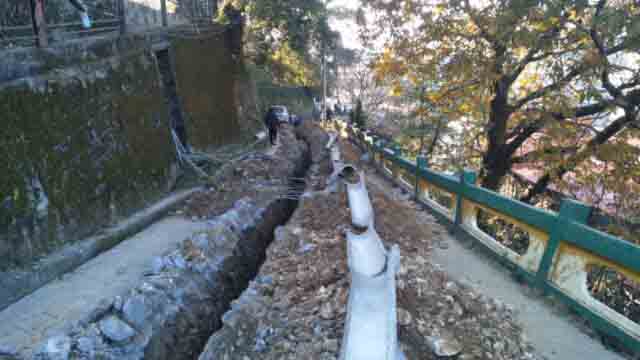 By Our Staff Reporter
Mussoorie, 4 Dec: The second phase of the electricity cables being laid underground started, today, at a cost of Rs 232 lakh. With this, Mussoorie will be rid of electric poles and hanging wires.
The cables will be laid underground from the Masonic Lodge bus stand to the municipal office and Anand Plaza. At the same time, in the first phase, electric lines were laid underground from Gandhi Chowk to Jhulaghar at a cost of about Rs 474 lakhs. In the third phase, the power lines from Kulri to Saraswati Shishu Mandir will be dealt with.
Pankaj Thapliyal, SDO, Mussoorie Electricity Department, said that work on the second phase would be completed in about one and a half months. He said that power supply was disrupted due to heavy rains and snowfall, due to which it had an impact on common life including tourism.
These would be beneficial as road width would increase for traffic; breakdown problem will be much fewer; there will be no fear of breaking of wires or electricity poles during a storm, and mishaps due to electrocution would be greatly reduced.