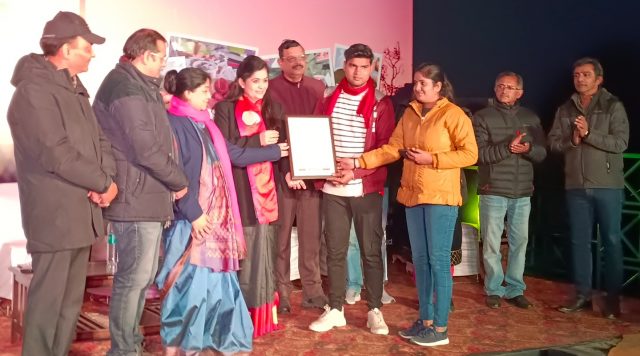 By Sunil Sonker
Mussoorie, 30 Dec: A three-day food festival was organised here with the aim of promoting the cuisine of Uttarakhand, which ended today. Master Chef Pankaj Bhadauria tasted the cuisine and praised this initiative of the government.
Master Chef Pankaj Bhadauria was present at the closing ceremony. During this, she inspected the various stalls set up selling the dishes of Uttarakhand and tasted the delicacies. She also praised the women who made the dishes.
Bhadauria said that the weather and atmosphere of Uttarakhand is very good. The food is very tasty and beneficial for health. The cuisine of Uttarakhand needed to be popularised everywhere. She said that due to these efforts of the state government, people in the country and abroad would know about the products and cuisine of the state. The farmers along with the local people would get a lot of benefits as a result. Employment would also be generated. The pizzas, momos, brownies, dosas, etc., are being made by the local woman from the products of the hills. Many women groups are preparing different types of dishes and dishes, which is a commendable step. Along with local cuisine, the food festival is also promoting the skills of women. Such programmes should be organized regularly.
Uttarakhandi folk dances, live bands and cultural programmes were organised during the festival. Along with this, various sports activities were held for children. Various types of competitions were also organised during the food festival and prizes were given to the winners.
Vivek Chauhan, Assistant Director, Tourism Department, said that in view of the New Year, the number of tourists has started increasing in Mussoorie. In such a situation, tourists from all over the country and abroad enjoyed the mountain dishes at the food festival. He said that the tourism department has to promote products along with nutritious dishes of Uttarakhand through the food festival so that the means of employment could be made available.
State President of the Uttarakhand Hotel and Restaurant Association, Sandeep Sahni said the Food Festival was very successful. He said that the products and dishes of the mountain can prove to be very effective in stopping the migration from the mountains.
In Junior Master Chef, Devik secured the first position, while Sanskriti was second and Nandini, third. In food innovator category for above 18 years, Vikas Rana secured the first position, Anu, second, and Piyush, third. In Traditional Category Food Stall Firm, Brentwood Hotel secured first position, Garhbhoj, Uttarkashi, second, and Saraswati Self Help Group, Mussoorie, third. In Fusion Cuisine, Udipi Café, Mussoorie, bagged the first position and Hotel Kesar Patta was second.