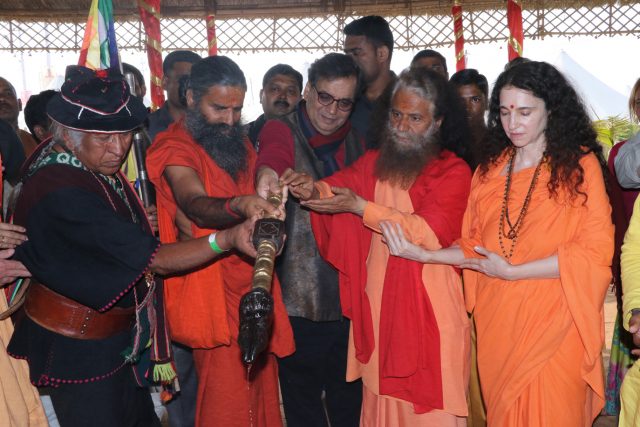 By OUR STAFF REPORTER
Prayagraj, 13 Feb: Today marked the inauguration of the International Yoga Festival’s 30th Anniversary. An inaugural celebration took place at Parmarth Niketan’s camp in the Kumbh Mela on the banks of the holy Sangam, where Swami Chidanand Saraswati, President of Parmarth Niketan, and Sadhvi Bhagawati Saraswati, Director of the International Yoga Festival, were joined by Swami Ramdev, Subhash Ghai, and Malini Awasti. It was an occasion to draw attention to the important role of yoga in not only Indian culture and history, but also in the people’s lives.
The inauguration was attended by participants from nearly 40 countries from around the world, showing visually the true union “yoga” of cultures and colours.
Swami Chidanand Saraswati emphasised, “Yoga is for all. It is beyond region and beyond religion.”
Swami Ramdev added, “We are all divine souls here. Every divine action is yoga. Yoga is our basic nature. With yoga you can stay fit physically. You can stay fit mentally. Yoga is a practice to performance every action with purity. Commit to becoming a yogi, nirogi (someone who is without illness) and upyogi (useful to society).”
The International Yoga Festival (IYF) has been taking place in Rishikesh since 1989, when it was first organised by the Government of Uttar Pradesh. Since 1999, Parmarth Niketan has been hosting this festival. After the state of Uttarakhand was established in 2000, Parmarth Niketan partnered with the new Government to jointly organise the event. The festival has achieved international acclaim, growing in size year-after-year. By bringing some of this year’s events to the Parmarth Niketan Camp in Prayagraj during the Kumbh Mela, the origins of the festival in the state of Uttar Pradesh are being honoured.
Over the next six days, renowned yoga teachers, such as Deepika Mehta, Tommy Rosen, Kia Miller, Anand Mehrotra, and Dr Yuva Dayalan, will be joined by Dr David Frawley and others, who will lead yoga talks and meditation. Kailash Kher and other musicians will perform. Individuals from more than 40 countries around the world will participate. Due to the importance of the Kumbh, the festival will also be attended by more than 30 tribal elders and leaders from across Latin America. It is truly a momentous union.
Parmarth Niketan will hosting the annual IYF in Rishikesh during the first week of March as per annual tradition. Each year, yogacharyas, teachers, students and seekers come from every corner of the globe to participate in this unique celebration in Rishikesh. Last year, it welcomed more than 2,000 participants from 100 countries to Rishikesh.
During the festival in Rishikesh on 1-7 March, classes will be available in pranayama, meditation, mudras, Sanskrit chanting, Reiki, Ayurveda, Indian philosophy and much more. Spiritual discourses will be held by revered spiritual leaders from India and abroad. In addition, the scientific dimension of Yoga and spirituality will be explored by world-renowned scientists. Throughout the festival, there will be special cultural dance and music performances by international artists. Every evening, Satsang and world renowned, divine Sangam Aarti showcase the best of universally applicable Indian culture, providing a true Bharat Darshan.
The opening ceremony of the Internatioanl Yoga Festival in Prayag Raj drew to a close with Swami Ramdev demonstrating pranayama exercises. Sadhvi Bhagawati Saraswati said in her concluding remarks, “Yoga means union. We unite within ourselves. We unite with the divine. And we unite with all creation. It is so auspicious to celebrate International Yoga Festival here on the banks of the Sangam where our sacred rivers come together in union, and where we experience the sacred yoga of coming together to study and practice this tradition together.”

Garhwal Post has established itself as a credible, balanced and forward looking newspaper in India. Based in Uttarakhand, the daily is read by the aware, socially and culturally responsible, high-income elite of society.
Contact us: info@garhwalpost.in
conservative women dating best overseas dating sites