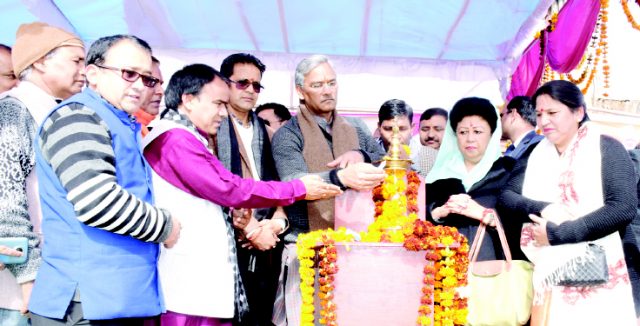 By OUR STAFF REPORTER
DEHRADUN, 16 Jan: Chief Minister Mr. Trivendra Singh Rawat inaugurated the ‘Atal Ayushman Uttarakhand Scheme’ by lighting a lamp at a function held in Pratap Inter College Premises, New Tehri, on Wednesday. He said that 3,77,744 families had got golden cards under the Scheme’ till date and providing better health facilities was the top priority of the state government.
He added that ‘Atal Ayushman Uttarakhand Scheme’ was a welfare scheme under which every family would get Rs 5 lakh free medical treatment per annum. The scheme is being implemented in the entire state and all 23 lakh families of the state would benefit. As many as 35,000 golden cards are being made every day. The aim of the scheme was that nobody ought to suffer due to paucity of funds in getting medical treatment and people belonging to every section of society would benefit. The Chief Minister revealed that eleven hospitals in Tehri District had been identified for the scheme and, already, 122 people had received the benefit of the scheme in the district.
Rawat appealed to the people to motivate their near and dear ones to get their golden cards so that more families got the benefit. He congratulated District Magistrate Sonika for opening four telemedicine centres in far off places in the district. He also gave Golden Cards to Pratima, Serva Devi, Anil Prasad Bijalwan, Sadhna Rawat and Asha Bahuguna.
Rawat also inaugurated and laid the foundation stones of 89 development projects worth Rs 221.81 crore in Tehri. A total of 49 projects completed at a cost of Rs 88.84 crores were inaugurated, while the foundation stones of 40 projects worth Rs 132.97 crores were laid.
Higher Education Minister Dr Dhan Singh Rawat said that Uttarakhand had become the first state in the country to care about every family by starting ’Atal Ayushman Uttarakhand Scheme’ to provide universal health care to everyone. He said that the state government has decided to observe 2019 as “Employment Year” and more than ten thousand jobs in various departments would be given during the year.
Tehri MP Mala Rajyalaxmi Shah, Zila Panchayat Chief Sona Sajwan, legislators Dhan Singh Negi, Vijay Singh Panwar, Shakti Lal Shah and Vinod Kandari, District Magistrate Sonika, SSP Yoginder Singh Rawat and others were present on the occasion.

Garhwal Post has established itself as a credible, balanced and forward looking newspaper in India. Based in Uttarakhand, the daily is read by the aware, socially and culturally responsible, high-income elite of society.
Contact us: info@garhwalpost.in
https://garhwalpost.in/older-capricorn-man-younger-aries-woman/