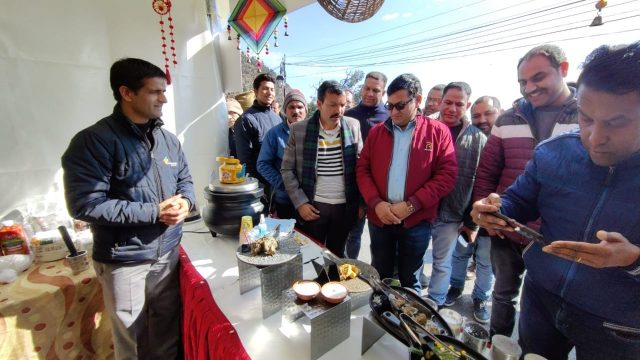 By Our Staff Reporter
Mussoorie, 27 Dec: A four-day food festival started in Mussoorie to promote the traditional dishes of Uttarakhand. Tourists coming to Mussoorie are enjoying the Pahari cuisine.
Mussoorie BJP President Mohan Petwal and SDM Shailendra Singh Negi jointly cut the ribbon and inaugurated the four-day food festival being organised as part of the Mussoorie Winter Line Carnival.
The food festival is being organised on the Mall Road by the Uttarakhand Tourism Development Board (UTDB) from 27 to 30 December. Various sports activities for children are also being organised in the festival along with Uttarakhandi folk dances, live band and cultural programmes. Local artists are introducing the culture and art of the state. The winners of the competitions will be awarded prizes.
On the first day, today, there was an influx of people to taste the various dishes and sweets.
Mohan Petwal said that the dishes and products of Uttarakhand are rooted in the culture of the hills, which has always attracted people. The effort is to promote tourism as tourists coming here like to taste the local cuisine. Another objective of the state government is to publish and broadcast in the country and abroad the recipes prepared from the ingredients grown in the state. This would help people get employment in the hill areas of the state, reducing migration. CM Pushkar Singh Dhami is making special efforts to promote the culture of the state along with the cuisine in other states and abroad.
SDM Shailendra Singh Negi said that in view of the New Year, the number of tourists has started increasing in Mussoorie. The food festival would add a special flavour to their visit.
The Garhwal and Kumaon dishes on offer are Dhumru Pallar, Almora Bal Mithai, Manduwa and Barley Roti, Kulath Dal, Pumpkin Raita, Sesame Chutney, Jhangore Ki Kheer, Sweet Rice, Gulgula, Tuar Dal, Jhangora, etc. Uttarakhandi folk dances, live band and cultural programmes add further dimensions to the festival.
Participating in the Uttarakhand Food Festival, the women of Garhwal Sabha said they have prepared many dishes served in the mountains of Uttarakhand. They appreciated the food festival organised by the government as a good effort. They suggested that such festivals should be organizsed in other states as well as abroad. Tourists were of the opinion that the cuisine of Uttarakhand should also be served in the big hotels and restaurants.
State President of the Uttarakhand Hotel and Restaurant Association Sandeep Sahni said that the Food Festival is being organised over the last 10 years. Such dishes are being served in hotels in the country as well as abroad, which is helping to a great extent in stopping the migration from Uttarakhand.
Also present on the occasion were Mussoorie BJP Secretary Kushal Rana, District Tourism Officer Jaspal Chauhan, Anil Godiyal, Mukesh Dhani and many others.