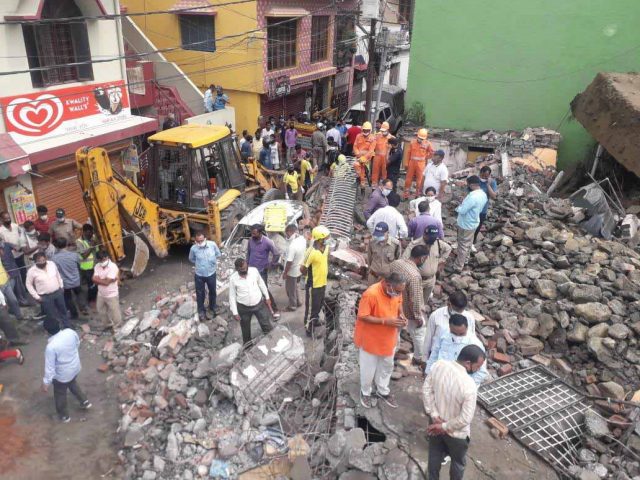 By OUR  STAFF REPORTER
DEHRADUN, 15 Jul: Four persons, including three of a family, died in a house collapse last night in Indira Colony of Chukhuwala area, here. Two are injured and presently hospitalised.
According to police sources, the house collapsed when a retaining wall (pushta) adjacent to the house suddenly caved in and fell on it during heavy rain last night at around 2 a.m. The retaining wall was of an under construction property.
Among the dead include an eight year old girl, Sristi, her mother, Vimla, aged 32 years, her paternal aunt, Pramila, and another woman, Kiran (aged 28 years), who was pregnant. All died as they were buried in the debris of the house following the collapse. However, Sristi’s brother, Krish, was rescued by the joint team of the Police, NDRF and SDRF. Sristi’s father, Virendra Singh, is a security official in a private bank and was away on duty! Kiran’s husband Sameer Chauhan was also rescued. Both the injured were sent to the Coronation Hospital by 108 Ambulance.
According to the police, the house belonged to Pankaj Massey who is a government official posted at Vikas Bhawan, Survey Chowk. He had rented out separate portions of this property to Virendra Singh and Sameer Chauhan, respectively.
On receiving the information, District Magistrate Ashish Shrivastava, IG, Garhwal Range, Abhinav Kumar, DIG Arun Mohan Joshi immediately reached the spot. They were followed by the rescue teams from SDRF and NDRF and the rescue operation lasted for several hours this morning.