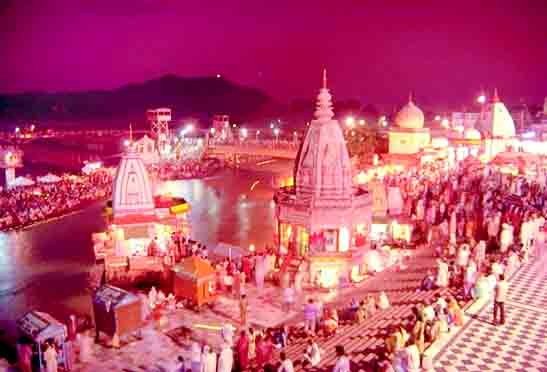 A few days ago, I had accompanied my friend with her two sons from Michigan, USA, to the holy city of Haridwar. With utmost reverence and prayers on their lips, they had come for immersion of the ashes of her husband. This was their first visit to the holy city, known to the whole of India and Hindus all over the world.
We came from the airport to Mahajan Bhawan, a decent charitable place with 225 rooms for people to stay and peacefully perform the rituals of their departed ones with a nice canteen, offering hygienic, delicious food at very reasonable rates. Jaswant, caretaker of this bhawan, welcomed us. After a Satvik lunch, we proceeded to Har ki Pauri for immersion of the ashes. Har Ki Pauri is the one of the most sacred Ghats in Haridwar and the preferred place where all the spiritual activities take place. The ghat is reckoned to have been built by King Vikramaditya in memory of his brother Brithari in the 1st century CE. The literal meaning of the term ‘Har Ki Pauri’ is “Har” meaning Shiva, “Ki”, “of”, and “Pauri”, “steps”. The priest of a nearby temple said that, during Vedic times, Shiva and Vishnu are believed to have visited Brahmakund in Har Ki Pauri.
Most irritating, embarrassing and humiliating is the way the pundits, pandas, innumerable beggars, rickshawallahs make your life miserable, everyone wanting to get their pound of flesh. Most scary were the beggars with amputated limbs and sitting on four-wheeled wooden planks.
After an effort, we located a priest to perform the rituals. It was rather weird to find most of the pandits at Brahmkund wearing jeans and not dhotis. The pandit performing the ceremony seemed knowledgeable, but kept asking for dakshina on some pretext or the other. Later, when my friend gave Rs 1000, he kept asking for more. The authorities have erected some bathrooms/change rooms for pilgrims at the ghats but all these were filthy and substandard. After this ceremony was over at the Ganga, we located the Panda who had the records of persons who died, earlier, belonging to Ghalib Gotra of Bhagat families hailing from Girhot, Sargodha, now in Pakistan. These Brahmins, called Pandas, have records of hundreds of years. There is a different Panda for different places of birth. We met the famous Devkinandan Pandey at Kushwa Ghat, who showed us the old records of visits by near and dear ancestors.
My friends from USA were very pleased to perform the ashes immersion ceremony and equally thrilled to find old records up to their great-grandfather. They also recorded their visit. However, I could make out that they were visibly irritated, angry and upset at the conduct of pandas, priests and the numerous beggars. I am a devout and committed Hindu, and like all other Hindus get extremely upset at the fleecing attitude of so called priests with limited knowledge at all our shrines and places of worship. The Vishwa Hindu Parishad, Hindu Mahasabha or other similar institutes must lay down strict rules and code of conduct. The Governments of India and Uttarakhand spend crores of rupees on providing infrastructure and facilities at Haridwar. It’s these, so called religious lot, who spoil the show.
Later, we went to Parmarth Niketan for the sacred Ganga Aarti – very soothing and pleasing.

Garhwal Post has established itself as a credible, balanced and forward looking newspaper in India. Based in Uttarakhand, the daily is read by the aware, socially and culturally responsible, high-income elite of society.
Contact us: info@garhwalpost.in
meetup flint