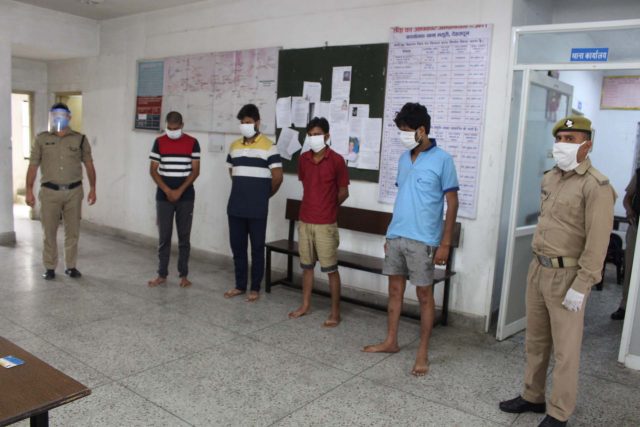 MUSSOORIE, 16 Jun: Four tourists, who had come to visit Mussoorie from Delhi, have been arrested by police for violating the rules on Covid-19 prevention.
Mussoorie Kotwal Devendra Aswal said that, during a police check, four Delhi-based youths in a vehicle were stopped while on their way to Mussoorie. The youths did not stop their vehicle and the police took immediate action at all entry points of Mussoorie. The police stopped the vehicle near the Mussoorie Gandhi Chowk checkpoint. The four youths were detained. They were under the influence of alcohol and without masks. They had not been quarantined nor were the relevant papers of the vehicle available, which was seized.
The four youths are Vivek Sharma, son of Ajender Sharma, Himanshu Tyagi, son of Vinod Kumar Tyagi, Sagar Kaushik, son of Devendra Kumar Sharma, and Utkarsh, son of Gaurishankar, resident of Shahdara, Delhi. Cases have been filed under IPC sections 269, 188 and 51 Disaster Management Act and Pandemic Act.