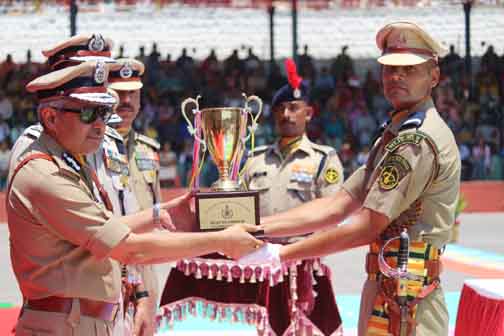 By Sunil Sonker
Mussoorie, 10 Jun: Forty-five officers of the ITBP after undergoing 25 weeks of rigorous basic training at the ITBP Academy, here, were inducted into the force after a colourful passing out parade and attestation ceremony held at the Parade Ground.
The Chief Guest on the occasion was Director General, ITBP, SS Deswal took the salute and reviewed the parade. Appreciating the quality of the parade, he emphasised the need for the personnel to meet the challenges in serving the nation with utmost zeal and dignity. The recruits had undergone 25 weeks of training in weapon handling, map reading, drill, karate, battle craft, field craft, internal security, border security and disaster management. They took the oath that they would discharge their duties in protecting the nation with all honesty and sincerity. He congratulated the passing out officer trainees on joining the force. He said that the ITBP is an extremely disciplined and highly trained border force deployed in the Himalayan ranges, where temperature dips down up to minus 45 degrees Celsius. The force was also providing security to installations abroad.
IG PS Papta said that the force was posted in the most inhospitable terrain from Karakoram in Ladakh to Arunachal Pradesh, covering 3,488 km. The troops were deployed in the mountain ranges that were 9,000 to 18,000 feet above mean sea level where the atmospheric temperature varied between 5 degrees Celsius and minus 40 degree Celsius. He congratulated the officers for successfully completing the tough course and expressed confidence that under their alert surveillance the borders of the nation would be safe. He said the hill state’s youth formed a major part of the Indian Defence Forces and had kept the tradition of laying down their lives for the honour of the country. The new officers were awarded various prizes for their excellent performance.
Present on the occasion were Commandant, Trainees, Venudhar Nayak, Commandant, Administration, Parminder Singh and others officials were present.
Parents of these passed out passed out officers also witnessed the ceremony. Out of the 45 new officers, 16 were from Uttarakhand, 12 from Uttar Pradesh, 6 from Himachal Pradesh, 4 from Rajasthan, 2 from Bihar, 1 each from Haryana, Punjab, Maharashtra, Nagaland and Manipur states.
Chief Guest Deswal also distributed prizes to the best candidates in different fields of training. Brajesh Kumar AC/GD was given the Overall Best Trainee Award and
AC/GD Rashpal Singh Guleria was Best in Outdoor and AC/GD Subodh Kumar, Best Indoor trainee.

Garhwal Post has established itself as a credible, balanced and forward looking newspaper in India. Based in Uttarakhand, the daily is read by the aware, socially and culturally responsible, high-income elite of society.
Contact us: info@garhwalpost.in
singles in denver