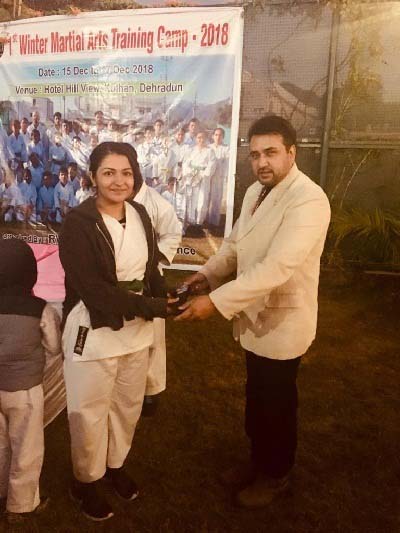 By OUR STAFF REPORTER
DEHRADUN, 17 Dec: Fifty-six students of the RVS Academy of Self Defence & Fitness undertook a gruelling two nights and three days Martial Arts Training Camp at Sahastradhra. Six training sessions and two treks were a part of the tough schedule, followed by the belt promotion/grading Test held on 16 December. Sensei Rajeev Saklani, Technical Director and Founder of the Academy, conducted the performance programme in which the students displayed their fighting skills.
PS Kalra, Principal, Guru Nanak Academy, was invited to preside over the function and award belts to successful students, whose beaming parents were also present to witness the ceremony.
Kalra, in a motivational speech, explained to the boys and girls the importance of self defence and how this skill converted their hands, knees and elbows into live weapons to protect themselves and also how the battle cry had a chilling effect upon the enemy. He said that karate helped also in self-discipline, calmness of mind and toning of the body. He appreciated the concept of gratitude in karate. He also lauded the sincere efforts of Sensei Rajiv Saklani and complimented the parents for choosing to send their children for this training.
Live combat was also a part of the grading and students wore safety guards and fought against various opponents to remove fear from their minds.
The programme concluded with a special ceremony at which Kunal Malla, Director of Olympus
High School, who is the first Black Belt from the RVS Academy, was felicitated along with Vidush Saklani the second Black Belt. They were awarded a Souvenir, each. Kunal Malla also awarded the belts to the Karatekas who qualified for the Brown Belt.