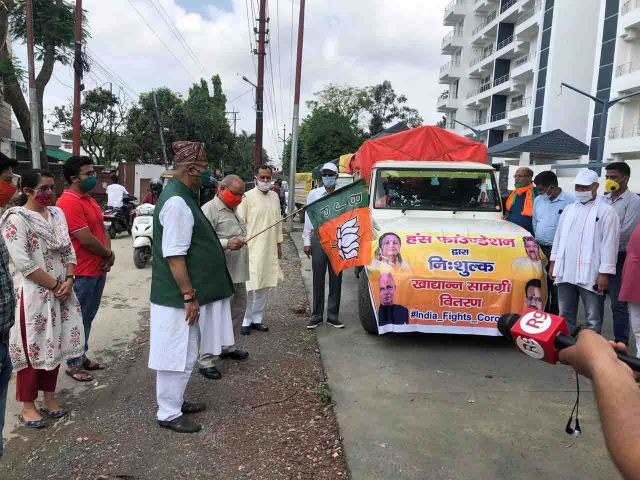 Mussoorie, 1 Jul: State BJP President Bansidhar Bhagat and Mussoorie MLA Ganesh Joshi flagged off 6 vehicles with 600 ration kits for different parts of the Mussoorie Assembly Constituency.
This ration was sent by the Founder of the Hans Foundation, Mata Mangla, for free distribution to needy people.
On this occasion, Bansidhar Bhagat said that all the MLAs should emulate the work being done by Mussoorie MLA Ganesh Joshi by helping the poor and needy. He said that ration, food, masks, sanitisers, etc., were distributed by the BJP workers during the Corona havoc all over the country. He also appreciated the decision to provide free wheat, rice and pulses under the Pradhan Mantri Garib Kalyan Anna Yojana till November.
MLA Ganesh Joshi thanked Mata Mangla, saying that 1500 ration kits had been provided by her for the needy people of Mussoorie constituency. He pointed out that in the Mussoorie Assembly constituency, 2.86 lakh locals and migrants were served food by Modi Kitchen, while ration kits were provided to more than 19,000 families through Modi Foods.
Present on the occasion were Poonam Nautiyal, Rajiv Gurung, Puneet Mittal, RS Parihar, Neha Joshi, Satyendra Nath, Sanjay Nautiyal, Niranjan Doval, Kamal Thapa, Yogesh Ghaghat, Anuj Rohila, Rakesh Sharma and others.