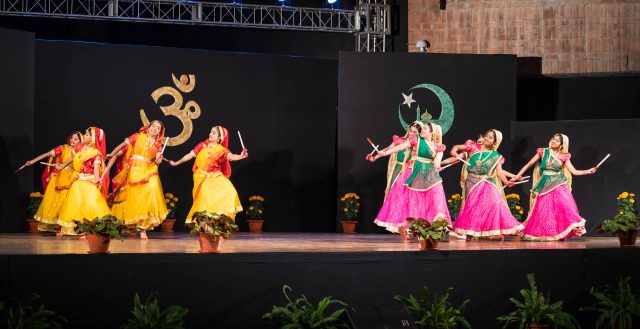 By Our Staff Reporter
Dehradun, 28 Nov: The Founders’ Day celebrations, 2020 began with the inauguration of the Exhibitions by the Mr. & Mrs. Nath, parents of the School Captain. They did so virtually by pressing a button to play the first presentation.
The Founders’ Day Celebrations commenced with the Exhibitions titled ‘Flavours of India’ that were streamed on the school website between 10:30 A.M. and 11:30 A.M. The Exhibitions this year were based on the theme of oneness, illustrating the idea of unity in diversity.  Demonstrating teamwork and maximum participation, the students of each class put up a presentation on a chosen state to endorse its culture, traditions, cuisine, handicrafts, festivals, languages, bio-diversity and much more. All this to bring to home the lesson that the many peoples of this phenomenal and one of its kind subcontinent stand as one despite the apparent differences! The exhibitions clearly established that India has proven to the world that diversity does not pull people apart, but it brings them closer together. The states covered were Dev Bhoomi- Uttarakhand; Meghalaya: The abode of clouds; the Enchanting Tamil Nadu; Spicy Rajasthan; and Gujarat – The Land of Lions and Legends.
The Outgoing batch presented personal glimpses of their journey over the years at Welham. The Class XI students explored life and times during Covid trying to answer many questions and presenting their own take on the stark reality of the current situation, besides sharing possible solutions to overcome the same.
‘Flavours of India’ provided a platform to the students from various states to come together to corroborate the school’s commitment to endorse mutual respect and support.  They worked together displaying integration and unity, which binds them as a single unit.
The main Founders’ Day programme held in the evening included Speeches, Prize Distribution and ‘Samashti’: An Ensemble.
Recognised by the Forbes Magazine as one of the fifty most influential businesswomen of Asia, the former CEO of Brittannia Industries, Vinita Bali, a global business leader with extensive experience and a Midas Touch, presided at the celebrations as the Chief Guest.
The School Annual Report was presented on the occasion by the School Principal, Padmini Sambasivam wherein she welcomed Deepak Kapoor as the new President of the WGSS along with other members and guests. She announced the appointment of Neelu Khanna, social activist and co-Founder of Aasra Trust, as Vice President of the Board of Governors.
She spoke about preparing ourselves further for situations that we cannot fully anticipate and endorsed the Four ‘Rs’, namely: Reading to broaden one’s horizons; Revamping one’s social media presence; Reinventing by venturing into new territories; and Rising to face the unprecedented changes. She mentioned how the pandemic has truly reiterated the much-clichéd skills of the 21st century such as decision making, problem solving, ability to innovate and most certainly adaptability and conflict resolution, both within and without.  She ended by quoting Maya Angelou thus establishing Welham’s commitment to rise to any challenge in the face of adversity: ‘You may write me down in history/ With you bitter, twisted lines/ You may trod me in the very dirt/ But still, like dust, I will rise.’
Deepak Kapoor addressed the audience as President and said the Board of Governors is always invested in the welfare of every stakeholder. He shared that even during a challenging time such as this, the school has stood strong behind each and every member. He assured that the Board will continue to take Welham to greater heights with best-in class amenities.
Vinita Bali also addressed the virtual gathering and thanked the Principal for inviting her to be the Chief guest. Bali shared her learnings with the audience. She said that the only competition one has is with themselves and that one must focus on empathy and compassion. She urged parents and teachers to not make a decision on behalf of the student but to allow them to prepare for a life that they enjoy. Once one enjoys what they do, Bali said, can one excel in it. She also shared that the true purpose of education is to liberate and open minds and emphasized on an environment that allows minds to open.
True to the School’s traditions, the Awards given out were not just to recognize marks alone or achievements in Sports and academics etc., but to extol those qualities which build a person’s character – Good Citizenship, Helpfulness, Creativity, Compassion and Community Service.
‘Long Service Awards’ were also presented to one Teacher and two Support Staff for having served the institution for 25 years.
Samashti: An Ensemble: The cultural programme was again a blend of three different genres Drama, Dances and Music. The Nukkad Natak conveyed a powerful message of Social, political, cultural, National and religious integration addressing issues such as Child labour, rape, hunger, poverty, corruption, female exploitation and the role of those in positions of authority. It exemplified the school’s commitment towards propelling the wheels of change albeit in its own little ways!  A conscious effort was made to convey a powerful message to accept diversity and co-exist in harmony without discord. This was effectively demonstrated through a musical composition invoking Allah, Aum and Hallelujah, wherein all musical instruments producing different sounds and retaining their individuality, came together to produce melodious harmony. The same could be seen when the various dance forms seamlessly and beautifully blended into one another without losing their essence and clearly revealing the one spirit that pervades them all.  The Nukkad Natak, established the idea of initiating change in the formative years and training ourselves to accept the differences and inculcate the idea of ‘Samashti’.
The participants referred to the school prayer book, ‘Geet Pustika’ which includes prayers made to Allah, Ishwar, Wahe Guru and Jesus claiming that though the prayers may be different, the spirit behind them is the same since ‘ Sabhi Prarthanao mein chipa hua bhav us tak pahunch jata hai!’
With this, the colourful cultural programme came to an end.