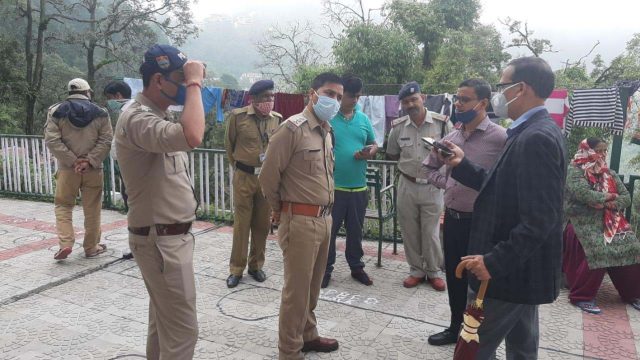 By Our Staff Reporter
Mussoorie, 29 Jul: An LPG cylinder exploded in a third floor flat of a residential building in the Lal Bahadur Shastri Administrative Academy, resulting in injuries to three men and four women. The injured were taken to the Academy Hospital with the help of Fire Service personnel and the Police. Three people in critical condition were referred to Doon’s Max Hospital. The incident occurred on Wednesday morning, when a gas leak due to the failure of the cylinder regulator caused a huge explosion. The explosion was so tremendous that the window and doors were damaged. Mussoorie Police Station In-charge Devendra Aswal said that the leaked gas caught fire due to a burning lamp in the prayer room of the flat. He said the incident was being investigated. Gas agency officials were also called to the spot. Local resident Saraswati Bhandari said that the blast was so tremendous that people nearby were also frightened. She accused the gas agency of not allowing cylinders to be checked during their delivery.
Those injured are Kavita Latwal (48), w/o MS Latwal; Rajni (40), w/o Laxman Kumar, Rajni (45), w/o Vijay Kumar; Vijay Kumar (48), s/o Baliram; Laxman Kumar (42), s/o Bachan Singh; Manoj Kumar (40), s/o Srichand; and Neeta (45), d/o Rajkumar.