By OUR STAFF REPORTER
DEHRADUN, 28 Dec: In the memory of the first Chief Minister of Uttarakhand, the late Nityanand Swami, a function was organised on his 90th birth anniversary at the Raj Bhawan on Thursday, which was inaugurated by Governor Baby Rani Maurya. She spoke in detail about his work and personality.
On the occasion, several persons were felicitated. The “Clean Politician Award” was given to Chief Minister Trivendra Singh Rawat. Everester Bachhendri Pal was felicitated with the “Uttarakhand Samman for Adventure”, while Kiran Ulfat Goyal was awarded for providing education to under-privileged children. The late Pappu Karki was awarded for folk singing, and the Udyog Alankar went to Pawan Agarwal. Awards for medicine were given to Dr KB Joshi and the late Dr Rameshwar Pandey.
CM Rawat, while accepting the award, said it was very difficult to remain honest in politics, as there are several pressures, but his Government was trying for a transparent administration to avoid corruption.
The programme began with lighting of the ceremonial lamp by all the dignitaries present. President RK Bakshi welcomed the dignitaries and Patron Dr S Farooq, in his poetic style, praised the qualities of Nityanand Swami, who was like a family member to him.
Swami Chidanand bestowed his blessings on the occasion, while Speaker of the Vidhan Sabha, Prem Chand Agarwal, Mayor Sunil Uniyal ‘Gama’ and Dr Saraswati Singh were the other speakers who paid tribute to the late leader. The late Swami’s four daughters were also present on the occasion. Jyotsna Sharma and Vinayak Sharma were the main organisers and proposed the Vote of Thanks and the Report on the activities of the SNN Association. An exhibition on the activities of Samiti was also held. A large number of eminent citizens from all walks of life were present, including Dr RK Jain, Chairman, Minorities Commission, and Dr RK Verma. 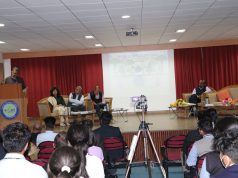