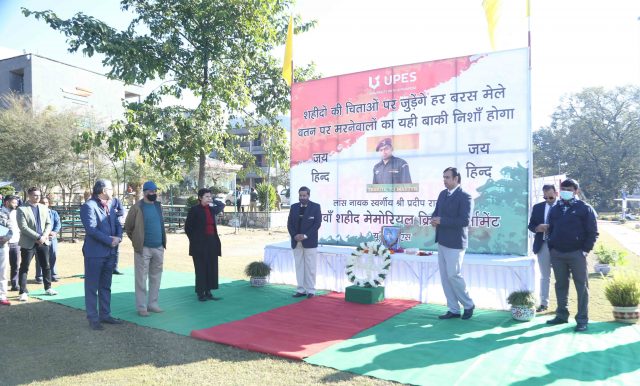 Dehradun, 17 Dec: UPES continued its legacy of paying homage to the brave martyrs of the Indian Armed Forces from Uttarakhand for their supreme sacrifice and honouring their family members by way of organising an annual ‘Shaheed Memorial T-20 Cricket Tournament’ in their memory this year too. The 7th Tournament in this series, organized in the memory of Shaheed Lance Naik Pradeep Singh Rawat of 4 Garhwal Rifles was inaugurated at the Bidholi Campus of UPES today.
Present on the occasion were Dr Sunil Rai – Vice Chancellor; Dr Veena Dutta – Registrar; Setu Madhvan – Chief Commercial Officer; Dr Githa S Heggde – Dean, School of Business; Dr Vijay Kumar Singh – Dean, School of Law; Brig SS Dhillon – Sr Director, Administration, Manish Madaan – Director Career Services & Corporate Relations; UPES cricket team and members of the teams playing the inaugural match of the event – Team Transportation Department and Team Jal Sansthan.
Dr Sunil Rai inaugurated the event. All teams will adhere strictly government norms on the pandemic.
Born in Dehradun, Shaheed Lance Naik Pradeep Singh Rawat hailed from Bagi Bamund village in Chamba, Garhwal, and was the only brother to three sisters. Inspired by his father in uniform, he enlisted in the Indian Army after his schooling and was inducted in 4 Garhwal Rifles. He attained martyrdom on 12 August, 2018, after a grenade attack by terrorists while he was on patrol duty at the LOC in the Uri Sector of Baramulla. He got married in January 2017 and made the supreme sacrifice for the nation at the age of 28 years, leaving behind his pregnant wife, three sisters, parents and a daughter – born two months after his martyrdom.
Arun Dhand, Sr Director, Public Affairs at UPES, disclosed that the tournament will witness 48 matches over 26 days between 20 participating teams at the UPES sports ground.
The inaugural match held between Team Transportation Department and Team Jal Sansthan was won by ‘Team Jal Santhan’. Manoj from ‘Team Jal Santhan’ was adjudged ‘Man of the Match’. The second match of the day was played between ‘Team Agriculture Department’ and ‘Team Secretariat A’. Team ‘Agriculture’ won. Tek Bahadur from ‘Team Agriculture’ took home the ‘Man of the Match’ Trophy. The final of the tournament is scheduled on 11 January at which the Martyr’s family will be present.