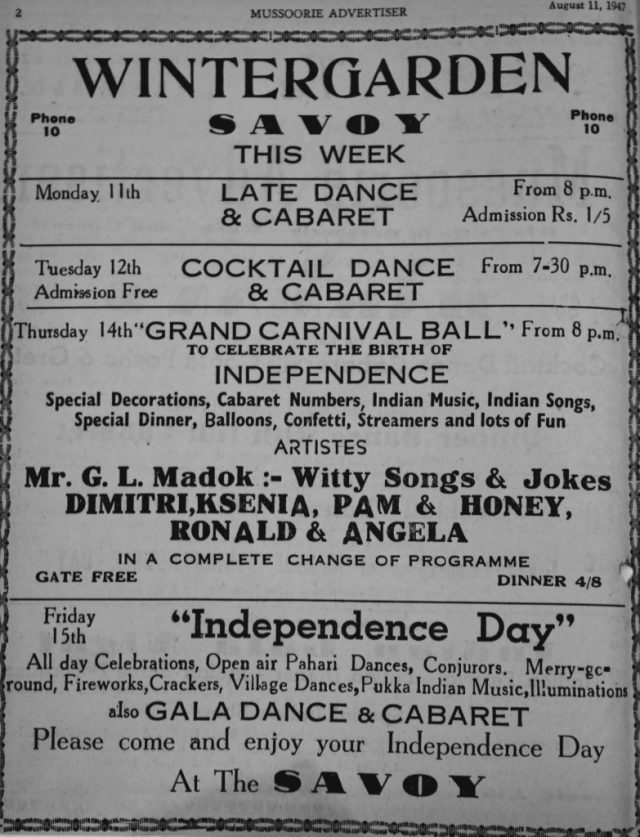 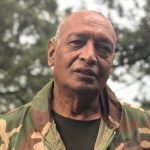 ‘ Guess who visited the Landour Cantonment office today?’ Father teased, untying his shoe laces. I did not have to try. He said: ‘The famous cricketer – Vijay Hazare!’ And he was not here to play cricket. Having retired, he had become personal secretary to the Maharaja of Baroda, and sought father’s help to take care of Fatehsinghrao Gaekwad’s two Mussoorie bungalows: Dunseverick and Gutherie Lodge – together called Baroda House – dominating the Library end, sitting atop its highest feature, 7,200 feet above sea level. By 1970 the scent of the abolition of privy purses and the de-recognition of royalty lingered in the air. At that point GROUND ORCHID LADY’S SLIPPER MUSSOORIE ADVERTISER AUGUST 1947 REINDEER GROUND ORCHID THE SPIDER LILY the Barodas’ decided they would be better off demolishing the buildings, selling off the rubble and holding on to the land. You could say that it was a sign of the times – there was precious little money in the market – and it took thirty-three small time shopkeepers from our bazaar to raise the one lakh rupees required to seal the deal. When the dust of demolition finally settled, our narrow lanes were choked with the remains of the day: beams, cast iron stoves, carpets, crockery, door frames, furniture, metal fireplaces, sofas, timber, tin sheets and all the other things that make up a house. At an in-house auction, second-hand dealer Abdul Salaam, bought two side tables, topped by what seemed like mosaic terracotta brown tops. ‘Kitnay ka hai? (How much?)’ asked Robert Manning, a geologist, who happened to be passing by. ‘Five thousand for two! One for three!’ haggled our antique dealer, more than happy at the possibility of doubling his investment. ‘Done!’ said the old man paying the money. ‘Get a coolie to drop them at my cottage!’ Later, much later, a niggling doubt crept up on Salaam. Something was not right. Making his way back to Falcon’s Nest, he tried to buy back at least one of the tables. ‘Definitely not!’ said the buyer, adding: ‘These were the largest pieces of Tiger Jasper – supposed to bring peace and healing – I have ever seen.’ No one knows how they came to be in Baroda House at the end of a long journey that began in either South Africa, or Brazil, or Australia. ‘How can you possibly put a price tag on them?’ he said. Talking g of price tags, takes me back to the spring of 1945. It found my father walking up the ramp to the old Savoy Hotel, he walked past the Post Office to arrive breathless at the front office sitting atop a flight of steps, built in the manner of a wayside railway station. ‘Babu!’ asked Cecil D. Lincoln. ‘What brings you here?’ As the owner of the place, for the life of him, he could not figure out what on earth was a home grown hill billy doing in his hotel. Obviously, the fellow was not there to join the Sunday buffet. In those days, local-yokels were not meant to step up to the high table. ‘What can I do for you?’ he asked. ‘I have an offer for your hotel.’ ‘You do?’ Lincoln mocked. Father did not miss the tone. But he had rehearsed his piece well. ‘Yes Sir!’ said he chirped. ‘I have in my pocket a blank cheque with an offer of fourteen lakh rupees!’ ‘For which block of my hotel?’ ‘All twenty-one acres of it!’ ‘That will be twenty lakhs! Not an anna more, not an anna less!’ ‘Is that your real price? Or is that your love price?’ ‘Babu! Get out! Leave my hotel right now!’ Gathering himself, he exited through the looming gates. Years later, he would remind us: ‘On 6thAugust 1945, the ‘Little Boy’ was dropped on Hiroshima. That ended the Great War which knocked the bottom out of the property market.’ Small wonder that a year later, Rai Bahadur Captain Kirpa Ram Jauhar of Rawalpindi mopped it up for half the sum. What happened to Cecil D. Lincoln? No one seems to know. All I have heard are unsubstantiated rumours of the journey home, where on a stormy night, the ship he was on sank and no one survived to tell that tale.