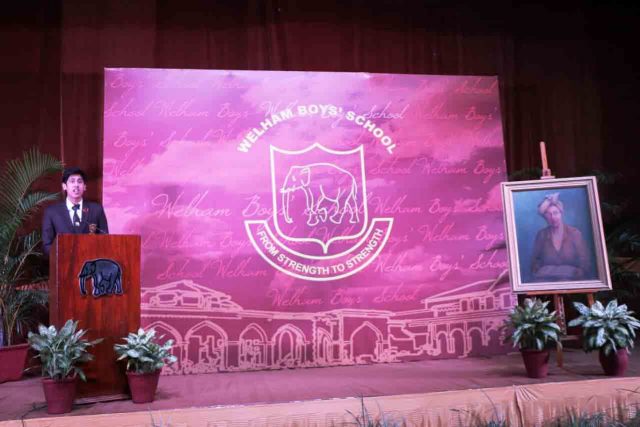 By Our Staff Reporter
Dehradun, 5 Dec: The 83rd Founder’s Day celebrations at Welham Boys’ began with the Founder’s assembly which had the honour of hosting  Karan Bajwa,Managing Director of Google Cloud as the Chief Guest. In this information age of internet band widths and data storage, it was more than fitting that Welham Boys’ School should have him as its Chief Guest. Having cut his teeth at Microsoft and then IBM, Bajwa has emerged as a leading personality with three decades of leadership experience not just in India but South Asia as well. He emphasised on the fact that a School has the strongest influence in shaping an individual and that it was important to judge people by their ability to adapt and not by the years of experience.
The school’s annual report was presented by Sangeeta Kain, Principal, Welham Boys’ in which she outlined the various achievements and the extraordinary steps taken by the school to brave the new normal. In a candid interview with the Principal,  Usha Kandhari, wife of the legendary Welham Principal, S. K. Kandhari shared the vision and passion of the Man in making Welham Boys’ School what it is today.
Darshan Singh, Chairman, Welham Boys’ School congratulated everyone and talked about how this adversity had brought challenges and opportunities  for the School. The School Captain, Sannidhya Agarwal in his address thanked the School for its contribution in the lives of all who have passed through its hallowed portals.
With time taking on a new meaning altogether, the school’s motto, From Strength to Strength continues to hold good. Though the physical interaction with all the accompanying participative colour was missing, the virtual platform allowed the school to reach out to a much larger audience that was not restricted to only those who could make the annual Founder’s Day pilgrimage to Welham.
An Art Exhibition was streamed to the audience followed by The Ensemble-which was a melodious fusion  of Indian and western music including the much awaited solo performance by  Raghav Kathuria, the School’s Music Captain. He played Heralds Dream by Bogdan Alin Ota, with the perfection of a master musician. The Ensemble ended on a crescendo with all the musicians, coming together to play the final notes.
A Tale of Mischief and Masoomiyat was a potpourri of several popular heroes:  Percy Jackson, Harry Potter, Shaktimaan, and Raja Vikram and Vetaal!  The tale with all these fantastic characters expressed the desire of all Welhamites to be back in School.
The online celebrations concluded with the traditional screening of the extremely popular Welham Newz, which over the years has become the traditional curtain call on the Founder’s celebrations.