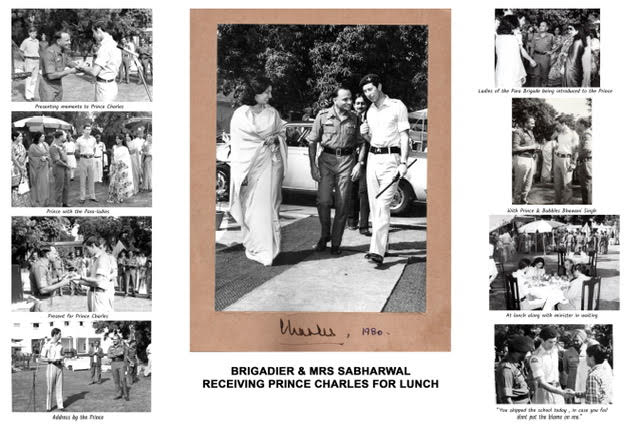 It was the winter of 1978. After having commanded 9 Para commandos during the 1971 War, I was given the command of 5O Independent Parachute Brigade located at Agra. One fine day in 1980 I received a call from the Prime Minister’s office. It was RK Dhawan the PM’s secretary informing us that Prince Charles, the Prince of Wales who is likely to be King of England soon, is visiting India for the first time and will be escorted by Lord Mountbatten. I was told that the government of India had decided that he will visit Agra for two days for which we the Parachute Brigade would be responsible. “The Prime Minister, Mrs Indira Gandhi wants the visit to be a big success”.

After this telephone, calls kept coming from Army Headquarters and the military intelligence Director.

The British military Attaché and one more member of the British Embassy from Delhi visited the Parachute Brigade to finalize the details. We decided to host lunch in honour of the Prince in the Para Brigade officers mess. All officers’ wives in town requested to be invited for the lunch with Prince Charles, as they had to have a photograph taken while shaking hands with the Prince. We ended up having a hundred and fifty guests for lunch. I called up Colonel Bhawani Singh of Jaipur, fondly known as Bubbles, who was also a serving paratrooper in the army. I requested him to join us for lunch, saying, “Bubbles while I am entertaining the British prince, I would like to have our very own Indian prince to be present with me”. Bubbles did come, of course, but Lord Mountbatten could not as he died in a terrorist blast in Ireland a week earlier.

The Prince Charles was now being accompanied by a British High Commissioner in Delhi. On 27 November 1980 I received Prince Charles the Prince of Wales at the Agra airport. We both got into the Rolls-Royce which had been specially brought from Delhi for the visit. The first thing the Prince said to me was “I’m sorry I gave you a wrong salute. You see when I got into the aircraft at Amritsar I was wearing a naval uniform and now I am wearing army uniform, and by mistake I give you a naval salute. We both had a good laugh. I also told the prince that lot of children had skipped their school in order to see him, my son was one of them. Later in the day when he met my son he told him, “You have skipped school today, but if you fail in your class don’t blame me.”

I had taken the prince to our training area and had organized a parachute jump for him, from the aircraft as well as from the helicopter. The prince was wearing parachute wings on his shoulder, so my wife asked him why did he had to take the risk of a parachute jump. The Prince said, “The British government made me Colonel of Parachute Regiment and I found that everyone in the regiment had done over 100 jumps, some even 200 jumps and I, as the Colonel of the Regiment had not a single jump to my credit. So, I requested the government to either allow me to do some parachute jumps or remove me from this appointment. The government permitted me to have two jumps by night and three jumps by day.”

During the lunch Prince Charles wanted to know about our Gorkha soldiers as well as about the Sikh soldiers. We shared a few stories. I told him that Gorkha soldiers are simple soldiers, they need to be given detailed instructions for a task and then they do an excellent job of it. I gave him an example of how I had once given my Gorkha buddy empty Brylcream bottle, just to show him that I wanted a similar bottle from the canteen. Sure enough he brought me another empty bottle of Brylcream!!

The Sikhs are also very good soldiers and have made the Indian Army proud. I narrated to him the story of Sikh soldiers’ famous battle of Saragarhi. To this the Prince said, “One day, if I am in power I would like to have Sikh soldiers also in the British army.”

It is good to see that at last, nearly after sixty five years, Prince Charles has become Charles III, the King of England. Long live King Charles III !