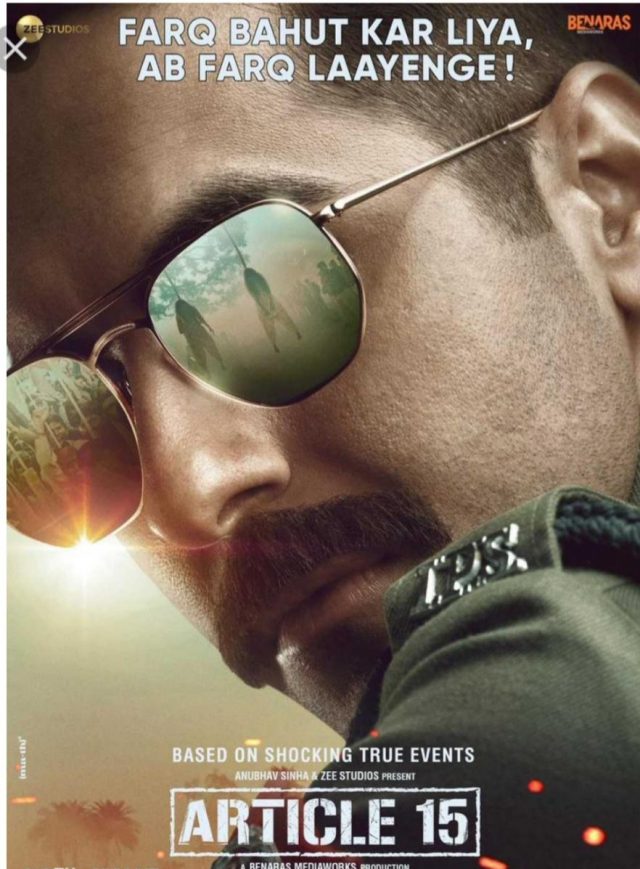 Article 15 is grim, dark and dreary. It traverses uncomfortable zones, ponders over disturbing behaviour of the powerful and affluent, makes one pitiful about the still-existing untouchability and caste disparity in the heartlands of India. The ace director Anubhav Sinha chooses to pick Article 15 of our Constitution and connect it brilliantly with a gruesome 2014 gang rape and murder case of two girls in Badaun district in UP. It is a fictional version of the horrific incidence. He has taken core cinematic liberties to create a befitting, nerve wrecking story that may force the viewers to cogitate upon this grave issue that exists in profundity in our country. It is important to mention here that the Article 15 of the Indian Constitution proscribes the State from discriminating against any citizen on the basis of any one or many of the aspects such as religion, race, caste, sex, place of birth and others. A young well-bred, IPS officer, Ayan Ranjan (Ayushmann Khurana) is on way to take charge of the Lalgaon police station. It’s a punishment posting for a reply given to a senior colleague, ‘Cool sir’ instead of ‘yes sir’. He is listening to Bob Dylan’s music and admiring the countryside. Simultaneously, a A powerful film that creates a heavy atmosphere group of villagers are singing a folk song, ‘Kahab to lag jai dhak se’ that compares the lives of the rich and poor. Their soiled clothes, worn looks, ruggedness of skin, speaks loud about their wretched lives. Ayan has studied in St. Stephen’s college, lived in Europe, wears gentleman kind-of clothes and is called, ‘Lord Mountbatten lost in the Page 7 India’ by his girlfriend. As a first shocker, his driver refuses to buy mineral water bottle from a low- caste shopkeeper. Very soon he is in the midst of a case of three missing girls. Very next morning, the bodies of the two girls are found hanging from a tree and the third is missing. For the one who knows so less about the ugly ground realities of prejudice and discrimination on the grounds of caste and economic disparity, it’s a jolt. The investigation begins. The film highlights the abominable treatment given to the grieving family members by the police to confess the crime in the name of honour killing. It is disturbing to know that the victims demanded a rise of three rupees per day and ended up losing their lives at the hands of a contractor to set an example for others not to poke out their neck. The pressure to hush up the matter, anxiousness of the police to close the case, the callousness in investigation, manipulation of the post- mortem report, difficult working condition for an upright officer make it a compelling watch. Article 15 is not an easy film to the heart. Many moments make one gasp for breath. The camera intensely captures the minutes of details, every expression and nuance brilliantly to make it an impactful watch. Seeing the girls hanging from the tree is enough to quiver the soul but the mist, fog, blurred visibility used as backdrop adds to the gloom. The unforgivable camera goes closer to the hair and limbs of the lifeless girls; it is nerve wrecking. The conversations between the policemen while trying to bring the bodies down further adds to the melancholy in the atmosphere. There are many instances in the film directly giving goose bumps. Ayushmann is effective and realistic as a police officer. He is not a macho cop like Singham or Simbha. His blood does boil, he too loses his cool but he nowhere loses his mind. When he is awakened to the fact that there are hierarchies in high caste and low caste too, a scene created to be the best, it blows his mind. He is unaware of caste- divide, caste-hierarchy but has the power and guts to face the challenge as a human in khakhi. He finds the horrendous behaviour of humans loathsome. His role nowhere tries to portray him as a super cop. He does nothing extraordinary but performs his duty with diligence and this is what makes him a hero. Ayushmann is neck deep in his character and his conversations with his girlfriend are basically the voice of his conscience, and that remains his driving force. Article 15 has some enchanting moments amidst all this murkiness. Ayan decides to walk through the waist deep swamp himself to search for the third girl, his colleague says, ‘Sir, kapde gande ho jayenge’ and another one adds a TV advice, ‘daag acche hain’, an indication of brilliant screenplay by Anubhav and Gaurav Solanki. Ayan’s residence, office interiors, the outside yard of the station that has a perennial overflowing sewage, all add to the eerie work environment. A bare-chested sweeper closes his nostrils, takes a dip in the manhole, pulls out the stuck garbage clogging the drain, all drenched in sewage sludge, it’s a nauseating but salutable job – an unforgettable scene with a clear message that Ayan is here to cleanse the system and ‘un’ mess the affairs. Sayani Gupta, the love interest of Nishad (Zeeshan Ayub), ‘daliton ka Robin hood’ is indescribably impressive. As a rebellion Nishad stays underground, deprived of the smallest of romantic ‘we’ moments with Gaura like staring at the moon or sitting on a riverside together. Gaura- Nishad’s intense talks create a lump in the throat. The other co-stars as Ayan’s colleagues, Manoj Pahwa (Brahmadutt), Kumud Mishra (Jatav) and Ashish Verma (Mayank) are show stealers in their respective parts. It is a pleasure watching them perform proficiently in utmost comfort zone. Article 15 firmly holds the audience’s emotions. All frames -seamlessly sown – weave a perfect narrative. Editing and camera work are par excellence. Music is good. It sheds no preaching or delivers no moral lessons yet it conveys what is meant to take away from it.

Garhwal Post has established itself as a credible, balanced and forward looking newspaper in India. Based in Uttarakhand, the daily is read by the aware, socially and culturally responsible, high-income elite of society.
Contact us: info@garhwalpost.in
best online dating for 50