Any visitor to Mussoorie asking for the highest peak would get ‘Lal Tibba ‘ as the usual answer. Nothing could be more wrong. That hillock, was levelled in the 1960s to make way for the TV tower. Up until then, tourists climbed to the top to gawk at the ranges, as they feasted on pakoras-n-chai from portly Kasturi Lal Dhingra’s canteen. As a child, I often tagged alongside him, on that winding road snaking past Char Dukan.

Around the 1970s, our City Father’s in their combined wisdom, scuttled ship to resurface a mile away atop a flimsy concrete structure and renamed it, well! Again Lal Tibba! That imposter is certainly not red, nor is there the trace of a tibba (or hilltop) anywhere in its vicinity. 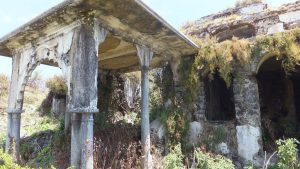 Meanwhile in downtown Mussoorie, the highest peak at 7,187 feet was once called Blucher’s Hill, in tribute to the indominable Prussian Field Marshal Blucher (1742-1819), who, at the age of seventy-one, blazed a trail of glory in the Battle of Waterloo, fighting alongside an array of British-led allies.

The history section of the old Mussoorie Library fills up the blanks: ‘Pinned under his dead horse, the old field marshal lay trapped for several hours, being repeatedly trod over by the French cavalry.’ The devotion of his aide-de-camp, who threw a greatcoat over his commander to obscure the old man’s rank and identity from the passing French riding rough shod over him, helped him stay alive. 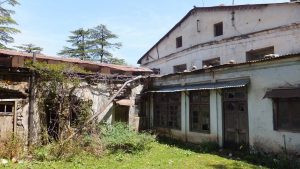 ‘Bathing his wounds in rhubarb and garlic, and fortified by a liberal internal dose of schnapps, Blucher re-joined his troops. Despite his age, ignoring the pain and the effort it took to stay mounted on horseback, he yelled: “Forwards!”
Who could dislike the old man?

I see him in pain and discomfort from his wounds, reeking, nonetheless of booze, garlic and of rhubarb liniment, full of energy, ready to deal Napoleon a crushing blow.

War’s end saw him invited on a state visit to England, to be formally thanked for his army’s role in the Waterloo Campaign. As his carriage stopped on a hill overlooking London, he is said to have exclaimed: “What a city to sack!”
Egged on by history, I struggle up the incline to the ruins of the renamed Highlands (in a map of 1844) gasping, short of breath, panting, tongue almost scrapping the ground, I manage to scramble to the top.
How I wish this business of growing old had only taken a wee bit longer! I struggle on, grumbling: ‘Old boy! You must learn to act your age!’ Of course in my heart of heart’s I hope I never will.

Looking around from this commanding height, I see the littered remains of history. Northwards lies Lyndale, marked on our early maps as Lyndhurst or Bansi Estate – the site of the Mussoorie Seminary, our first English medium school in the Himalaya, founded by the restless Scotsman, John Mackinnon, credited with many a first in these hills.

Drop a plumb-line from Highlands, chances it would oscillate, give or take a few feet, on two colonial bungalows, Logie and St. Bernard’s, both owned by Dr. Hugh Falconer, the legendary Superintendent of the Saharanpur’s Botanical Gardens, who planted two ginseng trees, in Company Bagh that two hundred year down the road, throw their yellow blossoms into the sky
May the twain continue to flourish!

Wish one could have said the same for Logie, a nursery for the horticulture department before, stripped of all its fitments and abandoned. Only an old wisteria creeper, fine as a lady’s ornament, lovingly wraps itself around the roof in one last furtive embrace.

Last month, out of the blue, a courier delivers a rare treasure – two delicate water-colours – sent courtesy the generous Narayan Swami, a Chennai-based art collector. Simply he writes: ‘I’m glad to see these paintings go back home.’ The one of St. Bernard’s is from its days of champagne and caviar. As I write, it warms the cockles of my heart to see that in a station, warped beyond recognition, Rani Indubala of Jind, the present owner, has restored it with love and care to perfection.

Garhwal Post has established itself as a credible, balanced and forward looking newspaper in India. Based in Uttarakhand, the daily is read by the aware, socially and culturally responsible, high-income elite of society.
Contact us: info@garhwalpost.in
dating sites for couples free