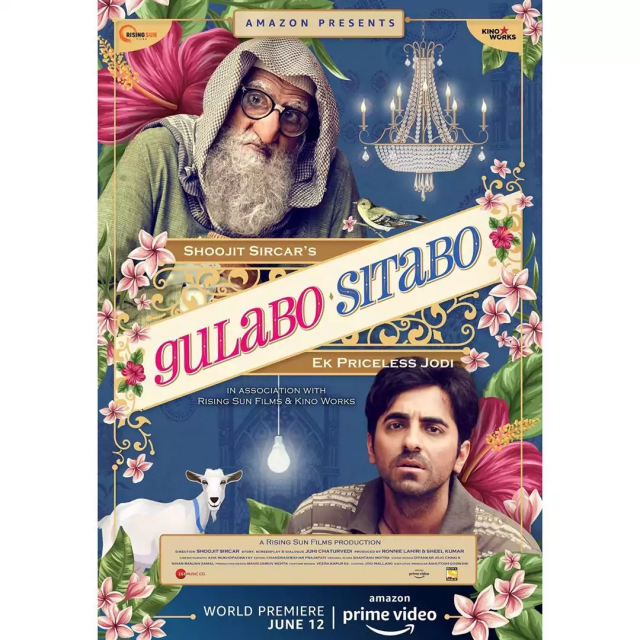 There is no torrent like greed. Greed is like fire. More you fuel it, more it flares, to engulf one in its blaze. Gulabo Sitabo is a story of a desolate old man, nearly in his 80s, oozing with greed. It is greed that makes him spring out of his bed each day. It is greed that he lets grow robust within him. It is something that he couldn’t see through the eyes of his consciousness. Purposefully, he married Begam, much older to him because she was the owner of Fatima Mahal – with a dream to own it one day. Each day his ears long to hear the news of begum’s death and he taking over the heritage property. What was once a palatial mansion, is now in shambles. Years of poor upkeep, the toil of innumerable seasons had corroded it and the pressure of many tenants deteriorated its condition. It is shown in pathetic state at par with the weary demeanour of Mirza.

Mirza’s ugliness in terms of his character, behaviour and conduct is made known in the first few reels. A dirty old man with soiled clothes, haggard beard, unclean look, thread-coiled glasses, crooked posture that resembled his inside being, angled legs (more arched with age and fruitless exertion) is shown selling few undainty stuff like stolen bulbs and cycle bells in a chor market; apparently a usual routine for him. His lofty aspirations to remove the age-old tenants and be the owner come to surface later. 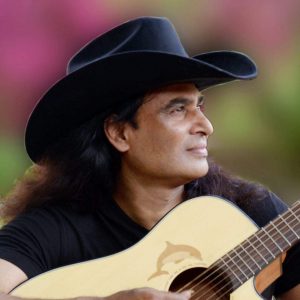 Bobby Cash of Doon, famous as India’s first international country music artist, and is known as “The Indian Cowboy, one in a billion” by the media. For the first time he sings a song for Bollywood, Budhao for Gulabo Sitabo. His voice is refreshing and describes the idiosyncrasies of the character Mirza, played by Amitabh Bachchan.
Anuj Garg, music composer from Doon has composed a couple of songs in the film including Budhao.

Fatima Mahal, the ground zero’s wretched bearing, is captured in deep colours to accentuate the depth of its wornsome condition. The tenants are living here for uncountable years in a loathsome state, tolerating the incessant hideous pranks of Mirza to flee them, who would steal bulbs, pickles, bedsheets, etc, proving their helplessness to be writ larger than their safety. They had no option but to endanger their lives by living in the crumbling haveli.

The title is inspired by the Gulabo-Sitabo, the famous puppets created by Srivastava from Pratapgarh, once an integral part of folk lore that presented warring sisters-in- law. Baankey, one of the tenants and Mirza are constantly on loggerheads as owner and unyielding tenant. Their daily skirmishes are hilarious yet disturbing. One angry kick on the wall by Baankey creates a big hole in the bathroom wall. The matter reaches the police station where the haveli catches the attention of a set of cunning sharks. An opportunist officer from the archaeology department and a lawyer specialising in property matters enter the scene. They find Mirza as an old, greedy yet imbecile person. They also sniff the vulnerability of tenants. Baankey shakes hands with the archaeology man, Gyanesh, demanding a substitute accommodation for the cooperation landed to the department to acquire this 100 years plus property and declare it as a heritage building. Who gets what and how much is what we need to enjoy in this dark comedy.

Shoojit Sircar’s consummating direction and Juhi Chaturvedi’s enjoyable script, impressive music score and endearing cast make this film an enjoyable watch ignoring its momentary dips.
Amitabh Bachchan as Mirza inspires affection and hatred with his stupidity and malicious intentions respectively. The master actor brings out an authentically caricatured character of Mirza, a man who lives, breathes and remains in the skin of a spiteful being, who has done nothing in life but acquiring the haveli and yet remained penurious. The very thought of owning few thousand rupees make him light headed. He doesn’t even realise the real worth of the haveli. Big B lets the audience taste the magnificence of his acting through notorious Mirza, an epitome of greed and ignorance.

Ayushmann Khurrana, another flawed man pays meagre rent of Rs 30/ month to Mirza. His daily squabbles with Mirza are captured brilliantly by the camera in the dark and dingy interiors of the Haveli that narrates the misery and despondent state of this man. His frustration to run the family, handle Mirza’s idiosyncrasies, and the tantrums of his girlfriend all come naturally through his acting and through Lucknowi dialogues and accent.

Vijay Raaz as Gyanesh, and Brijendra Kala as lawyer, add heart and soul to the story with their respective performances. Both play their cards in their own style to lure Mirza and the tenant, while addressing their appetite to make good money by befooling the timid. Farrukh Jafar as Begum has added life to her role with her charm and excellent delivery.

Another actor that deserves a hearty mention is Baakey’s sister, Guddu (Srishti Shrivastava), the street-smart shrewd girl who comprehends all the happenings and dealings related to the haveli and is a pleasing watch. Her crispy dialogues, occasional flings with men using them for some fast bucks, her plans and ideas all add spice in that cheerless living.

Gulabo-Sitabo is a fun watch where greed dominates each character. The authenticity in their flawed self is relatable through the desperate and pitiable circumstances they are in. They make us laugh, draw sympathy, awe with their plans and make us sad with their state.
The end is as heartening as their dim fortune but the Tom and Jerry kinda chase is not worth missing.

(The movie is released on Prime Video)

Garhwal Post has established itself as a credible, balanced and forward looking newspaper in India. Based in Uttarakhand, the daily is read by the aware, socially and culturally responsible, high-income elite of society.
Contact us: info@garhwalpost.in
https://garhwalpost.in/east-texas-hookup/ dating meme funny