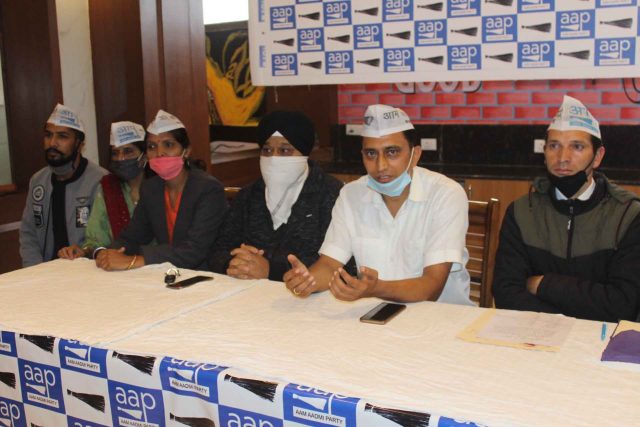 By Our Staff Reporter
Mussoorie, 23 Aug: After the announcement by Aam Aadmi Party National Convenor and Delhi Chief Minister Arvind Kejriwal on contesting for the 70 assembly seats in Uttarakhand, the party has started adding workers at the booth level in all the constituencies of the state. In this context, the party’s Mussoorie constituency In-charge Naveen Parsali announced the town’s new executive.
Addressing media persons, Naveen said that according to an AAP survey, 62 percent of the state’s people wanted AAP to contest elections in Uttarakhand. He claimed AAP did what it promised to do, an example of which was Delhi, where education and health were at the best level. He also asserted the Delhi Government had done well against the corona virus.
Parsali alleged that the Uttarakhand Government had entirely failed to develop the state. The condition of education and health in the state was poor. It could not do anything to prevent the corona infection. Uttarakhand was continuously lagging behind in the field of development. He claimed that, in 2022, AAP would do better with the cooperation of the people and form a government with an absolute majority. Uttarakhand would be developed on the lines of Delhi.
Maninder Singh Sethi, Social Media Incharge, Aam Aadmi Party, Delhi and Anurag Mittal were present on the occasion.
The Mussoorie unit of AAP was also announced. These are: Sunil Singh Panwar, Mussoorie President, Harpal Khatri, Vice President, Sunil Jairwan, Secretary, Abhilash Saini, General Secretary, Keeti Kandari, Spokesperson, and Vinay Ahluwalia, Treasurer. Mussoorie AAP women president would be Bhavna Goswami, vice president Salma Khan, secretary Sheetal Bailwal, secretary Rashi Goyal, female spokesperson Vandana Bhandari, and treasurer Tahmina Khan.

Garhwal Post has established itself as a credible, balanced and forward looking newspaper in India. Based in Uttarakhand, the daily is read by the aware, socially and culturally responsible, high-income elite of society.
Contact us: info@garhwalpost.in
https://garhwalpost.in/dating-as-a-single-mom/ fast and furious 9 stream date