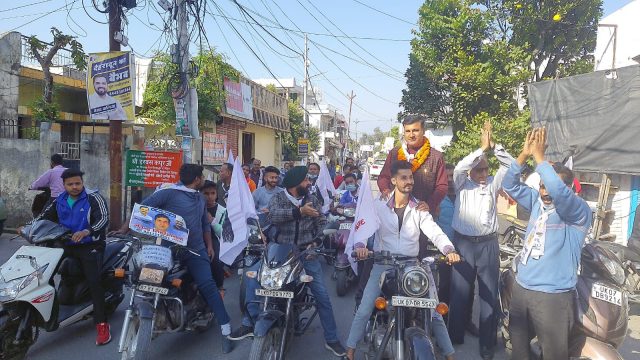 By Our Staff Reporter
Dehradun, 7 Nov: Aam Aadmi Party’s State Spokesperson Ravindra Singh Anand led a two-wheeler rally in the Cantt Assembly constituency here, today, to propagate the party’s ‘promises and guarantees’.
The rally began from AAP’s Cantt Assembly office and took a circuitous route in the area.
On the occasion, Anand said that AAP guaranteed employment and free 300 units of electricity. The rally was organised with the aim of making people aware of these promises.
He said that AAP’s work was visible in Delhi, where it had lived up to its promises. Now it was the turn of Uttarakhand. He claimed the public would not forgive the BJP and Congress for deceiving them in the past twenty years. Now, the people wanted a third option.
A large number of supporters including Mukesh Singh, Jitendra Bahl Vishal Bansal, Mohit Kumar, Veer Singh, Vinod Bhatt, Anudeep Kaur, Abdul Jabbar, Gulfam Malik, Naveen Singh Chauhan, Armaan Bag, Pragati Mann, Pappu Salma were among those who participated in the rally.