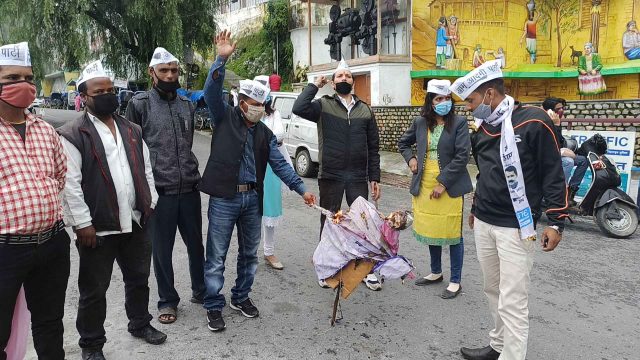 By Our Staff Reporter
Mussoorie, 25 Aug: Aam Aadmi Party workers gathered here, today, to protest against Khanpur MLA Kunwar Pranav Singh ‘Champion’ rejoining the BJP. The protest was held under the leadership of Mussoorie constituency in-charge Sumit Dayal. They raised slogans against Champion and the BJP government.
Sumit Dayal said 13 months ago, Champion had uttered abuses for the people of Uttarakhand and was expelled by the BJP for 6 years. He said that Delhi Chief Minister Arvind Kejriwal had announced that APP would contest all 70 assembly constituencies in Uttarakhand. A frightened BJP was now enrolling even those it had expelled. He said AAP would free Uttarakhand from corruption. Chief Minister Arvind Kejriwal wished to develop Uttarakhand on the lines of Delhi.
Present on this occasion were APP Mussoorie President Sunil Panwar, AAP Mahila President Bhavna Goswami and others.