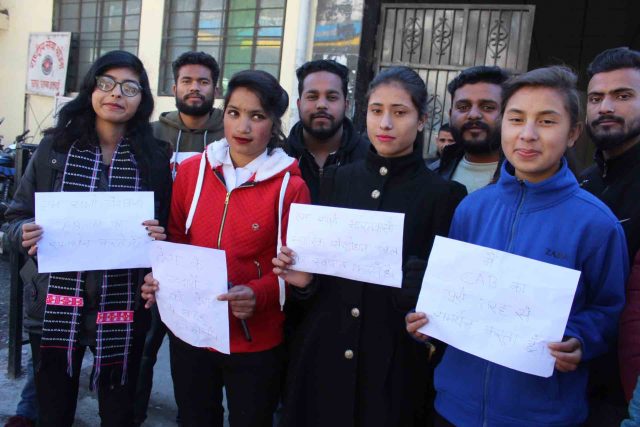 MUSSOORIE, 17 Dec: Activists of the Akhil Bharatiya Vidyarthi Parishad welcomed the amendment to the Citizenship Act as they gathered at the MPG College main gate and raised slogans in favour of Prime Minister Narendra Modi and Home Minister Amit Shah. ABVP Mussoorie President Aditya Padiyar, Tripti Badoni and Sumit Bhandari said that the Citizenship Amendment Act was an attempt to tie all the citizens of the country together in one thread. Unity and integrity would be strengthened. They Act would ensure India would be freed from illegal intruders. Therefore, all the people of the country should welcome this bill. They said that Hindu, Sikh, Christian, Parsi, Jain and Buddhist minorities who came to India due to religious persecution from neighboring countries Pakistan, Afghanistan and Bangladesh would get Indian citizenship under the CAA. Present on the occasion were Abhilash, Amit Panwar, Anil, Sumit Bhandari, Kunal, Nitin Shah, Moon Kala, Manish Nautiyal, Ashish, Ankit, Naresh, Nikita, Kajal, Anjali and many others.