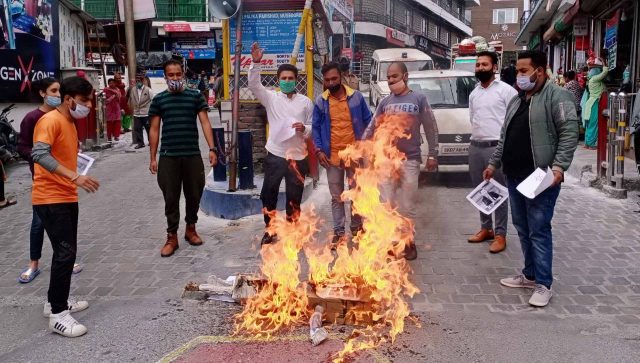 MUSSOORIE, 19 Jun: Akhil Bharatiya Vidyarthi Parishad activists gathered at Picture Palace Chowk here, today, and staged a strong protest against China. They burned an effigy of the Chinese President and raised slogans against China.
They said that China constantly did the politics of deception which would not be tolerated. They demanded the Government of India respond effectively against China soon. They declared that Chinese goods would not be sold in India and anyone doing so would be opposed.
Present on the occasion were Ravindra Rawat, Ashish Joshi, Aditya Padiyar, Amit Panwar, Pooja Negi , Kajal Negi, Kunal, Nitin Shah, Siddharth, Arjun, Rahul Rawat, and Anita Saxena.

Garhwal Post has established itself as a credible, balanced and forward looking newspaper in India. Based in Uttarakhand, the daily is read by the aware, socially and culturally responsible, high-income elite of society.
Contact us: info@garhwalpost.in
free foreign dating sites women dating up https://garhwalpost.in/proximity-dating-app/