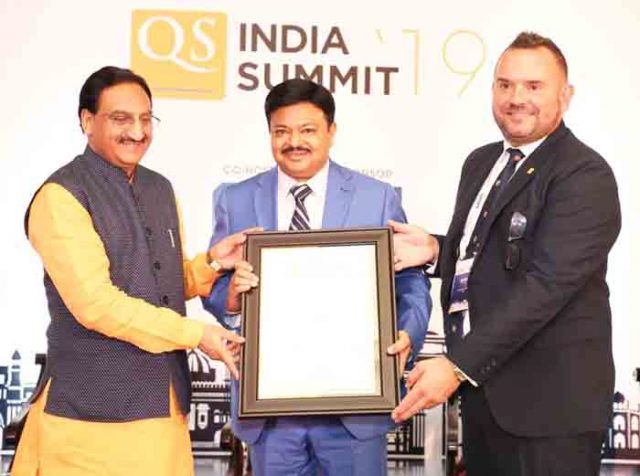 DEHRADUN, 21 October: Graphic Era has brought laurels to Uttarakhand again. In the prestigious QS I-GAUGE ranking, Graphic Era Deemed University has been awarded diamond category. With this, Graphic Era has become the only university in the country to have got diamond category this year. Union Minister of Human Resource Development Ramesh Pokhriyal ‘Nishank’ and CEO of QS Ashwin Fernandes awarded the certificate of this highest ranking category to President of Graphic Era Education Group, Prof (Dr) Kamal Ghanshala. Appreciating Dr Kamal Ghanshala’s contribution in the field of technical and higher education, Human Resource and Development Minister Nishank mentioned the former’s struggle during the Uttar Pradesh days and the journey to setting up two universities. Nishank expressed his happiness at an Uttarakhand university reaching the top ranking. During QS India summit, held in Goa, QS I-GAUGE, the top rating agency, which assesses universities and colleges across the country, announced its ranking and awarded diamond category to Graphic Era Deemed University. Along with this rating and ranking, which is awarded for being the best in overall category, Graphic Era, based on its spectacular placements, has also been given diamond category for employability, teaching and learning facilities and for entrepreneurship. Ashwin Fernandes said that the rating is based on a thorough academic audit of an institution on 50 major parameters based on national and international standards. This diamond rating has been awarded for the next three years. On the occasion of Graphic Era Deemed University being awarded the diamond category, President, Graphic Era Group, Prof (Dr) Kamal Ghanshala said that getting annual packages of Rs 55 lakh in BTech and diamond category had been possible because the state-of-the laboratories, which are in-tune with the latest technologies being used in the industry, trained professionals while keeping in mind the future needs of the industry. It may be noted that no other university from any other state in the country could reach the diamond category for the year 2019-22. Earlier, the country’s largest government agency for assessment and accreditation of educational institutes, NAAC, had accredited Graphic Era Deemed University with A grade. This university has been placed highest in Uttarakhand after IIT Roorkee, in the central government’s list of top universities in engineering category. Recently, after Prime Minister Narendra Modi appreciated a student of Graphic Era for inventing the world’s smallest and cheapest ECG machine, the university, which holds a distinct position amongst educationists and scientists in the world, began a major initiative to encourage more youth to become job providers rather than job seekers. Graphic Era has set up an incubation centre with the help of the central government’s ministry of science and technology. The incubation centre, better known as TBI, has gifted the world several startups like powerful drones, cheaper than those made in China and the world’s smallest ECG machine. Vice Chancellor, Graphic Era Deemed University, Dr Rakesh Kumar Sharma was also present on the occasion.