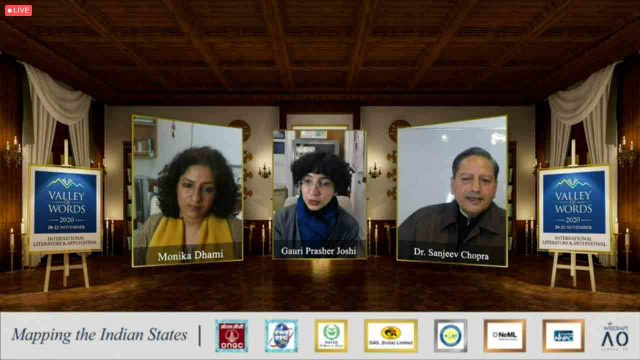 By Arun Pratap Singh
Dehradun, 20 Nov: On the inaugural day of the fourth edition of Valley of Words Literature & Art Festival, a special session was hosted at the Savoy Writers’ Bar on “Mapping of Indian States” by history scholars Monika Dhami and Gauri Prasher Joshi, in discussion with senior IAS officer Sanjeev Chopra (1985 batch) who is currently posted as Director of LBS Academy of Administration. Chopra’s interest in mapping grew when he saw some earlier maps of India at Survey of India. He has since written several articles and columns on this subject. He is working on the Maps of India project wherein he is looking at the interstate boundaries in post independence India. He was of the opinion that the key to the mapping of Indian states post-independence was the leadership’s acceptance of its diversity, particularly its linguistic diversity.
At the onset of the debate, in response to a question by Monika Dhami, Chopra reminded that Articles 1, 2 and 3 of the Constitution had given the right to the Union of India to convert a territory to a new state or reorganise the boundaries of the existing states or change their names. While the British had constituted the states of India purely from the point of view of administrative convenience, independent India reconstituted states as per the local aspirations, on the basis of diversity, particularly linguistic diversity. He said that while the external boundaries of the country were more or less defined, its internal boundaries were liable to change from time to time in tune with the local aspirations and demands and political aspirations, besides grounds such as development and administration. Accepting that certain political interests also played a role in the formation of states, he said that there was nothing wrong legally or morally with this as India was a democratic country acceding to people’s aspirations from time to time in this regard. After independence, the linguistic rights of the people, which were reflected in various movements, were recognised. He said that there was not much of difference of opinion in this regard among independent India’s great and visionary leaders like Mahatma Gandhi, BR Ambedkar or Jawaharlal Nehru.
He reminded the audience that, once, a delegation of Sikhs had called on then Union Minister BR Amdedkar to demand a separate state for Sikhs, which he refused and observed that he would readily agree to a state if the demand had been made for a separate state for Punjabi speaking population.
To another question by Gauri Joshi with regard to India’s comparison with Pakistan in this respect, Chopra said that there was a huge diversity of cultures and languages in Pakistan, too, but this diversity was never accepted and never became a basis there for the constitution of states. The foundation of Pakistan was based on Islam and, therefore, all other identities were brushed under the carpet whether it was Sindhi or Baloch or Kashmiri or the Muhajir population. India, on the other hand, had a stable democracy where diversity of languages and cultures was accepted. He went on to remind that, even in the times of Rama and Mahabharata, there was a concept of Jambu Dweep or Bharat as a nation while accepting different regions as different kingdoms like Ayodhya, Kaushal, Magadha, etc., of the Jambu Dweep or Bharat Varsha. Conceding that politics could have defined linguistic nationalism and led to certain movements in certain states like Tamil Nadu against the alleged imposition of Hindi as the national language, he added that he did not see much wrong with that. He, however, added that political mobilisation of people on the issue of linguistic nationalism or regionalism led to certain disadvantages for national political parties versus the regional parties and might have given rise to regional parties as the national parties had wider interests not confined to a particular state and were not in a position to compromise on that.
During the discussion, Chopra felt that Nehru looked at the entire West as his constituency and looked at the issues from the lens of the world, but Patel and Shastri stuck to the Indian perspective and constituency. However, there was some commonality between them regarding basis of state formation. 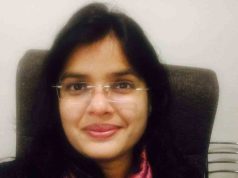 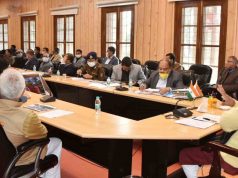 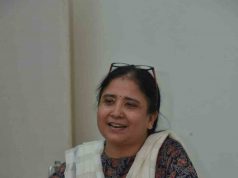