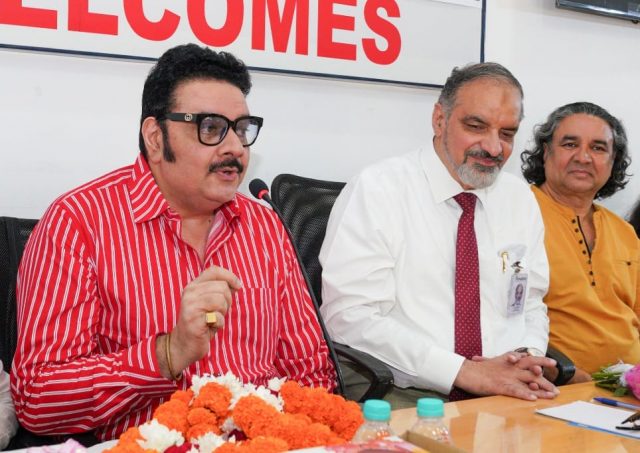 By Our Staff Reporter
Dehradun, 29 Sept: Actor and TV artiste Shehzad Khan, son of Bollywood’s popular actor/villain of yesteryear, Ajit (Hamid Ali Khan), visited Himalaya Wellness Company at Clement Town on Thursday. He was received by the President of the company, Dr S Farooq.
“It is a great privilege that Shehzad, who has the looks and voice of his father, could take time off to visit the company,” said Dr Farooq while introducing him.
Senior media personality & actor Satish Sharma was also present on the occasion.
Shehzad addressed a gathering of workers and entertained them with hilarious anecdotes and dialogues from his father’s movies like
“Kalicharan”, and his own movie “Andaz Apna Apna”. People eagerly waited for the famous “Mona darling” dialogues of Ajit. He narrated several funny instances that happened when he was shooting for films. As an actor, one has to get into the skin of different roles in order to give the very best. He mentioned that villains played a very important role in the films of his father’s era. Whether it was murder, dacoity or other evil doings, it fell on the villain’s lap and heroes reacted to those situations apart from singing, dancing and romancing. Shehzad has a great comic sense and he mimicked his father’s voice brilliantly.
Later, Shehzad also visited the company museum and evinced a lot of interest. His fans fondly remember some of his popular movies like “Qayamat se Qayamat Tak”, “Andaz Apna Apna”, “Gharwali Baharwali”, etc.