By Our Staff Reporter
Dehradun, 19 Aug: Uttarakhand Assembly Speaker Premchand Agarwal today convened a meeting of the Business Advisory Committee of the state legislature at the Vidhan Bhawan, here, today. It may be recalled that a weeklong monsoon session of the state assembly is due to begin on 23 August.
The meeting was attended by the Leader of the BJP Legislative Party and Chief Minister Pushkar Singh Dhami, the new Leader of the Opposition, Pritam Singh, and the new Parliamentary Affairs Minister Bansidhar Bhagat, Deputy Leader of Congress Legislative Party Karan Mahra and BJP MLA Khajan Das, who are also members of the Business Advisory Committee. 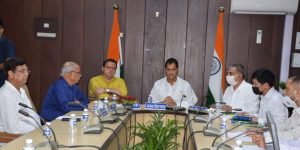 During the meeting, Speaker Agarwal said that there were many matters of state and public interest on which the public expected serious contemplation from the House during the session. He added that the people wanted that their hopes and expectations reach the government through the House. He also expressed the hope that the opposition and the ruling party would play a positive role in ensuring a constructive and meaningful discussion and smooth functioning of the House. He added that efforts would also be made to provide maximum opportunities to members to present their views on the subjects and to convey the sentiments of the public to the government through the House sittings.
During the meeting of the party leaders, the opposition also promised smooth cooperation to the House.
Agarwal also appealed to all the members to actively participate in the proceedings and to follow the health safety protocols for Covid-19. The Business Advisory Committee chiefly discussed the agendas and conduct of business during the session. It was agreed that tributes would be paid on the first day of the session to the MLAs who had died since the last session of the House, which included Indira Hridayesh, who was the Leader of the Opposition, MLA Gopal Rawat, former Haridwar MLA Ambrish Kumar, former Education Minister Narendra Singh Bhandari and former Union Minister Bachi Singh Rawat.
Agarwal stated that a meeting of the business advisory committee would again be held in the evening on 23 August to finalise the business of the House for the days ahead.
Agarwal, later, informed the media that the Legislative Assembly had received 784 questions for the Question Hour from 19 MLAs. Among the Bills to be laid on the Table of the House during the Session included the IMS Unison University (Amendment) Bill, 2021, DIT University (Amendment) Bill, 2021. In addition, the Uttarakhand (Uttar Pradesh Zamindari Abolition and Land Settlement Act, 1950) (Amendment) Bill, 2021, the Uttarakhand Char Dham Devasthanam Management (Repeal) Bill, 2021 would also be laid on the table of the House.
Beside the members of the House, Secretary in charge of the Assembly Mukesh Singhal, Secretary of Legislative Assembly Hira Singh Bonal, Secretary Narendra Rawat were also present at the meeting.

Garhwal Post has established itself as a credible, balanced and forward looking newspaper in India. Based in Uttarakhand, the daily is read by the aware, socially and culturally responsible, high-income elite of society.
Contact us: info@garhwalpost.in
https://garhwalpost.in/oracle-compare-dates/ american dating site best dating sites for over 40 australia