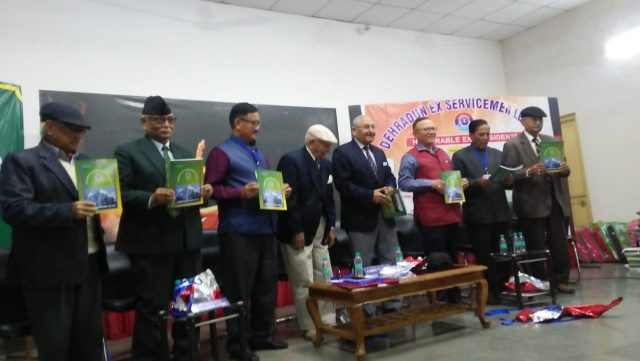 DEHRADUN, 4 Dec: The Annual General Meeting of Dehradun Ex-Services League was held on Sunday at the Sainik Institute, which was attended by a large number of Ex-Servicemen and Veer Narees, who were later felicitated. Veteran Lt Gen Anand Swaroop was the Chief Guest and Lt Gen R Prasad was the Guest of Honour. Also on the dais were Brig KG Behl (Retd), Patron, and Col US Thakur. Two minutes silence was observed to pay homage to the departed souls and War Heroes.
The function began with a talk by Col Arvind Kant, Director, ECHS, and Col Kuldeep Sirohi, who explained in detail the latest facilities being provided and how various complaints received were being solved. He particularly mentioned that provision was being made to provide all types of available treatment at dispensaries or by referring to empanelled hospitals. Col Arvind Kant said that now medical certificates required for getting driving licence, etc., would be given by the doctors of ECHS poly clinics. Efforts were being made to get all medicines prescribed by doctors. Henceforth, the empanelled hospitals would be required to take permission from ECHS Polyclinic if some further extension for stay in hospital for treatment was required, which earlier was the responsibility of the patient.
Various dignitaries also spoke on the occasion and wished DESL further success, which included Col Bhupinder Singh Sahi, Nitin Thakur, Satish Sharma, Capt Limbu, Neel Thapa and others. Veer Narees and heads of Zonal Shakhas who performed well including the PRO, were felicitated by Lt Gen Anand Swaroop, Lt Gen Prasad, Brig Behl and Col Thakur.
The news letter was also released. It was edited by Col BM Thapa, the Senior Vice President, who is presently away in Singapore. The Directories were also distributed.