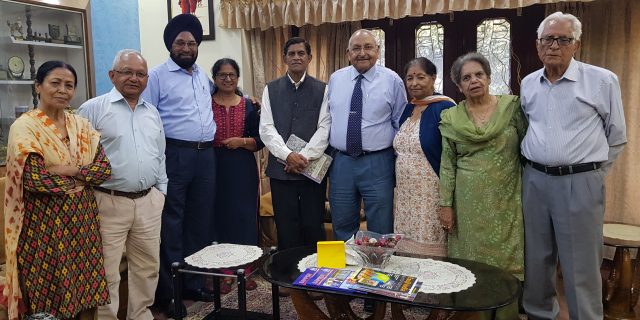 By OUR STAFF REPORTER
DEHRADUN, 28 Mar: Brig KG Behl (Retd), President, All India Consumers Council and Sanyukta Nagrik Sangathan, stated today that these organisations were proud of the Indian space scientists and the government, who had shot down a live satellite in space, 300 kilometres away with an Anti Satellite Missile.
“It is a very proud moment for the country that India has become the fourth nation after the US, Russia and China with the capability to launch missiles to destroy satellites in low-earth orbit,” he declared. With the successful test-launch of the anti-satellite (ASAT) missile and destruction of the target, India had crossed another important threshold in demonstrating its capability to defend its space assets. No wonder that the scientists had compared this feet as almost akin to India conducting a surgical strike in space.
The meeting of these organisations was held today at Kalidas Road and was attended by Brig Behl, Sushil Tyagi, the Secretary, Col BM Thapa, Sr Vice President, DESL and SNS, Col BD Gambhir, JS Jassal and others.
India had 48 orbiting satellites till recently – the largest such constellation in the Indo-Pacific region. They need to be protected as these are “sitting ducks”, according to experts. Mission Shakti showed that India was able to actively kill a satellite orbiting at an altitude of 300 kilometres.
It was stated that though the Prime Minister in his broadcast to the Nation did not mention the name of the ‘target’ satellite, this was possibly one called Microsat-R, which was launched at an altitude of 277 km by a Polar Satellite Launch Vehicle (PSLV) on 24 January this year. The satellite weighed about 740 kilograms. But it is learnt from Indian Space Research Organisation (ISRO) that the satellite was for defence research and its destruction will not affect the environment as it will break into small pieces and burn away.