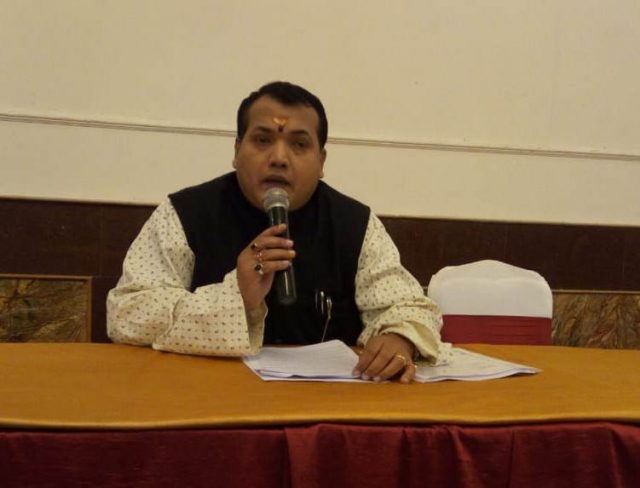 By OUR STAFF REPORTER
DEHRADUN, 21 Feb: The All India Legal Aid Forum organised a press conference, today, to pay tribute to Netaji Subhas Chandra Bose, Dr Shyama Prasad Mukherjee and Dr Lal Bahadur Shastri.
Jaydeep Mukherjee, General Secretary of the Forum, said on the occasion that it was very unfortunate that, till now, the nation was not aware of the circumstances of Subhas Chandra Bose’s reported death. He demanded that the present Union Government enquire and disclose the real truth behind the mysterious death of three national heroes of the nation, because for the last sixty years a caucus and some power hunger groups tried their level best to conceal the real truth.
He recalled that on 18 August, 1945, a plane crashed and it was rumoured that Netaji died in it. He claimed this news was not at all authentic. In 1956, the first commission was set up by Jawaharlal Nehru under the Chairmanship of Sahanwaz Hussain and the report of the said commission was not accepted by the elder brother of Subhas Chandra Bose, Suresh Chandra Bose. Another commission was set up by Indira Gandhi, then Prime Minister, under the Chairmanship of retired Justice GD Khosla. But, in 1977, the report of the Khosla Commission was rejected by the Cabinet and then Prime Minister, Morarji Desai, on the floor of the Parliament. Netaji’s supporters also opposed grant of Bharat Ratna to him ‘posthumously’.
The Calcutta High Court set up a Commission to enquire into the disappearance of Netaji under the Chairmanship of Retired Justice Manaj K Mukherjee. The Commission decided that Netaji Subhas Chandra Bose was dead; he did not die in the plane crash; the ashes in Rankoji Temple were not his; and that it was the duty of the Central Government to find out what happened. KGB files reportedly said that he did not die on 18 August, 1945, and he took shelter in Soviet Russia.
It was stated at the PC that the Central Government was keeping 41 files regarding Subhas Chandra Bose as top secret. The Forum has demanded that these files be declassified; KGB files obtained; the contribution of “Azad Hind Fauj” and Subhas Chandra Bose in the freedom struggle be taught in the school and college syllabi; to declare 23 January, Netaji’s Birth Anniversary as a National Holiday. Also a big “Bronze statue” of Netaji Subhas be set up in front of Red Fort in Delhi.
He also raised similar questions about the ‘mysterious deaths’ of Dr Shyama Prasad Mukherjee, who died in a Kashmir Jail on 23 June, 1953, and PM Lal Bahadur Shastri in 1966.