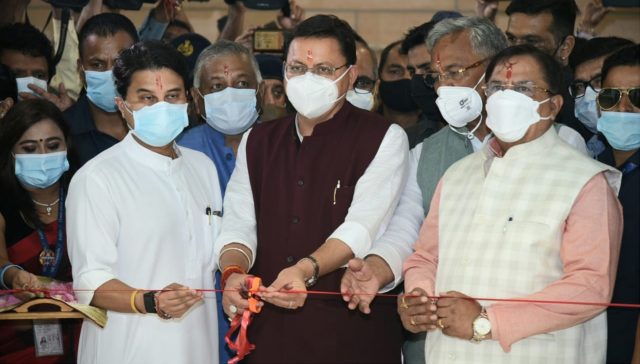 Dehradun, 8 Oct: Union Minister of Civil Aviation Jyotiraditya Scindia, along with the Minister of State in the Ministry of Civil Aviation, General Dr VK Singh (Retd) inaugurated the new Terminal Building at Dehradun Airport today.
The new terminal is capable of handling 1200 passengers per hour as opposed to 250, currently. From the current area of 40,000 square feet, the facility has now been expanded to cover 3 lakh square feet. The Union Minister said that, in Phase-II of the project, an additional 1 lakh square feet area would be added and the airport would be equipped to handle 1800 passengers.
The Minister appreciated the large wall mural that adorned the new terminal and said that the building reflects the cultural and natural heritage of the hill state. Anyone just by stepping in the building can witness the state flower, mural of Chardham, Hemkund and Yognagri Rishikesh.
Scindia emphasised that air services are markers of economic progress. Furthermore, tourism and civil aviation are two facets of the same coin. In a world obsessed with instant gratification, air-services assume even greater importance. He added that, in the last 7 years, 11 cities had been connected to Dehradun as opposed to the earlier three. The Union Minister also announced 3 new flights for the state – Dehradun-Pithoragarh, Pithoragarh-Hindon, Pantnagar-Pithoragarh, respectively.
Minister Scindia also flagged off two new heli-services in the state earlier. The Dehradun-Pantnagar-Pithoragarh-Pantnagar-Dehradun heli- service will be operated by Pawan Hans. Similarly, the Dehradun-Chinalisaur-Dehradun heli-service will be operated by Heritage Aviation.
The Union Minister added that 18 new routes in Uttarakhand had been announced under the UDAN project. Some of these are Dehradun-Srinagar-Dehradun, Dehradun-Gauchar-Dehradun, Haldwani-Haridwar-Haldwani, Pantnagar-Pithoragarh-Pantnagar, Chinayalisaur-Sahastradhara-Chinayalisaur, Gauchar-Sahastradhara-Gauchar and Haldwani-Dharchula-Haldwani.
The Union Minister said that a new helicopter policy for the nation would be announced at the 3rd Heli Summit. In hilly and difficult terrain it is necessary that there’s a revolution in the heli sector along the lines of the change witnessed in flight operations. The aim of the government is to provide air services to the common persong and the government is committed to making that a reality.
Chief Minister Pushkar Singh Dhami, Member of Parliament Ramesh Pokhriyal ‘Nishank’, RS MP Naresh Bansal, Speaker, Legislative Assembly, Premchand Aggarwal, and MLAs were also present during the inauguration.
Earlier, the Union Minister inaugurated the Doon Drone Mela 2021 in Dehradun. The event began with a paragliding demonstration. The Minister also interacted with the drone companies exhibiting their prototypes at the Doon Drone Mela. He also interacted with students about the Drone Rules notified by the Union Government and said that the types of fee has been reduced from 75 to 4 and number of forms to be filled from 25 to 5.
On the occasion, Scindia said, “We recognise the immense opportunities that use of drones bring in. The Government of India is working towards enabling the same with a liberalised drone policy and the launch of the Production Linked Incentive (PLI) Scheme. We want that the Uttarakhand Government works towards developing Dehradun as an Aerosports and Drone Hub of India.”
The Drone and Aerosports Demonstrations included a paragliding demonstration by the Border Security Force. There was an emergency search and response drone demonstration with an indigenously 3D-printed drone by the Drone Application and Research Centre (DARC) and State Disaster Response Force (SDRF). It was followed by a brief survey drone demonstration by the Aarav Unmanned Systems (AUS) under the SVAMITVA Scheme, along with a training drone demonstration by Sqn Ldr Varsha Kukreti (Retd.).

Garhwal Post has established itself as a credible, balanced and forward looking newspaper in India. Based in Uttarakhand, the daily is read by the aware, socially and culturally responsible, high-income elite of society.
Contact us: info@garhwalpost.in
single man 2022 identity theft dating sites